Each year we come up with a new shirt design for Fiddle Hangout Players Union members. So not only does your membership support the site, turn off some ads for you, and give you access to exclusive discount codes... it also gets you a cool shirt! Here's the new shirt design for 2013.

New for this year, we're offering long-sleeved shirts for $5 extra. A lot of folks have more t-shirts than they need already, so the long-sleeved option gives you the chance to get a shirt you'll wear more often.

Please note: new members who join before 2013 starts will get a 2012 shirt. Wait until Jan 1 to join if you want to get the new 2013 shirt. If your membership expires in 2012 and you renew you will receive a 2013 shirt. (If in doubt, just look at the shopping cart--it will tell you what year's shirt you are getting). 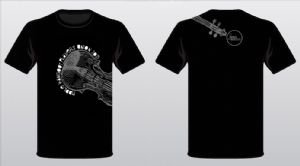 I think that is my favorite design so far.

I like it, and I like the long-sleeved option. Thanks, as always, to you and the FH team for your hard work and great ideas.

I would love it if you had one with a collar! Thanks!