I do have a blog.

Occasionally I share blog posts that relate to fiddle.  Please feel free to give it a gander!  Here's an article I wrote about meeting Marie Wilson, fiddler Red Wilson's wife. 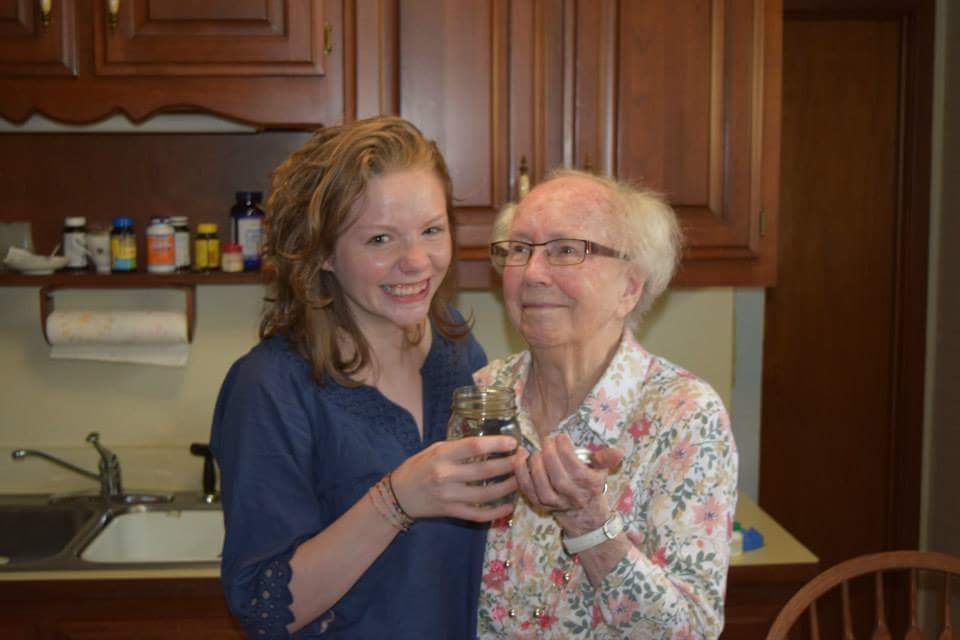 Marie Wilson, one of our favorite people, passed away recently.  We are so grateful to have had the chance to know her and her wonderful family.

Sarah took an intro to Appalachian Music course her last year at Appalachian State.  On the downside, I had to give up my job as a graduate teaching assistant for that class.  (Turns out they frown on amorous relationships between students and teachers at universities.) On the upside, Sarah and I got the pleasure of meeting the one-and-only, hilarious Marie Wilson at her home in Ledger.

The App. Music class required a final project.  Students were pretty free to learn to play an instrument, or a new tune, or write a research paper, or do something that related somehow to Appalachian Music.  Sarah elected to learn a new waltz and write about its history, etc.  When she mentioned this to me I instantly thought of Red Wilson's "Marie's Waltz."  I said, "Sarah, I can show you that waltz, and then we could go visit Marie!  It would be so cool!"

I wish I could say that I had learned it directly from Red, but he had passed on before I was bitten particularly hard by the fiddle bug.  I do remember the first time I heard the lovely little waltz though.  I was at Ray Dellinger's old shop, and (as it often did) Red came up in conversation and Ray asked if I had ever heard "Marie's Waltz."  Ray suspected that Red had been trying to learn that "Civil War" tune--"Ashokan Farewell," and then got off on a tangent and came up with a whole new tune.   I don't know about that, but I do know that Ray took out a little Walkman CD player and stuck headphones on my head and over those little tiny speakers I heard the most beautiful tune.  And right there I started following along with my fiddle, trying to work it out.

Fast forward a little, and I showed Sarah the tune.  Teaching her goes like this:  I play a bit of the tune and she plays it back.  If I play more than she is ready to hear, then she whacks me with her bow.  It is effective but harsh.  She plays it beautifully--it was worth every wince and whack.

When we went to visit Marie, I was thrilled.  We pulled up in the driveway, and Sarah had this notebook full of questions for the namesake of her new-learned waltz.  Marie's daughter Anne met us at the door and Marie shuffled over to meet us with a big grin.  We went into the living room and sat on the couch, and Sarah hardly needed a single question.

Marie told us about growing up in Ledger in the little house near the barn that leaned for years and years.  About how her family had donated land for the high school to be built and a particularly sweet story about Red hopping out of their car to change a tire, forgetting his crutches and walking around the car.  The doctor had told him he'd probably never walk again after sustaining terrible injuries in WWII.  He ran to the window beaming and surprised. "Marie!  I just walked!"
​She told us tales about Red making corn liquor,  and even let us sniff, but not taste, his last jar of homemade peach brandy.

Then, Sarah played her "Marie's Waltz" and she teared up and said, "Beautiful.  It's just like he was here with me."  She went on to explain that, one day, she scolded Red; "You write all these songs, but you've never once made one for me!"  Red, seemed a little taken aback, and headed off to his little studio garage.  Later on, Red's new CD came in the mail and there it was, "Marie's Waltz."
​
Marie was sharp, funny, and totally original.  I'm really grateful that Sarah and I got to visit with her.  She's always on our minds when we go out and play places.  We dedicated our first CD to her, and we'll continue to play Red's sweet original waltz in honor of the one-and-only Marie Wilson.

Be the first to comment on “I do have a blog.”

'"Burl Hammons - The Fiddling of Burl Hammons" - Where to find?' 2 days