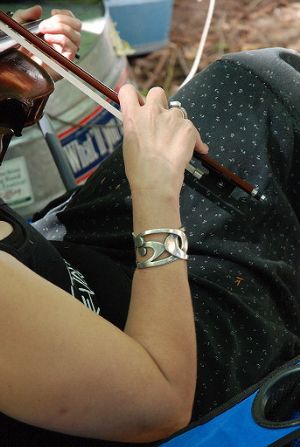 That's a nice shot of your up-bow hold. For now, at least, I still hold the bow classical style, however, my pinky looks like yours in your picture. My lame excuse (literally!) is that I messed it up attempting to catch a football when I was 13. I suppose it is the only finger that I could afford to have messed up and still play the string instruments that I do. It's opposing nature sure seems handy for holding the bow.

My pinkie tends to straighten out on the E, and bend to varying degrees when on the other strings . . .

Interesting bow hold! I think I'd probably be touching the bow hair, I'll have to try that. I see we have a simular taste in jewelry. Now, that's a neat pic, but doesn't exactly show me who I'm blogging with.

No, no bow hair touching. You can't see it but I try to keep my thumb bent. Actually the bow hold is somewhat close to classical, though I do choke up a bit to take better advantage of the bow's balance for drones and double stops. Probably the only thing I do that is even vaguely close to classical.

And I did notice y'all called it a bow HOLD! LOL! I guess I have had just a bit of influence around here!

Kant see how ya's kin fiddle in a foldin kloth chair. Gimme a bar stool. ( not that'd it hep me any ). LOL.

hey, bj,
I LOVE your silver bracelet. Great advertising photo for the craftsperson!

LOL! That craftsperson has been deceased for many years, I believe. It seems every vintage jewelry dealer in Manhattan or on the Northeast antiques show circuit has tried to pry that off my arm at one time or another.

I know George T! We go way back to a session taught by Alan Block.. 1982 or so. That session produced a number of fiddlers, including Paul Milde (who you mentioned in your comments on Fiddle Hell 2009).

Synchronicity! After playing it up at Hell '09 with Art Bryan, I've been listening intently to a recording of Alan Block playing Bonny Bunch of Rushes. I can play it, but not as well as I want to, it's a simple sounding tune that's deceptively complex to get it right, and of course Alan, the master, makes it sound so EASY. Paul is a dear man whose head is stuffed with wonderful tunes. George I met up at '08 Genero, however I don't remember seeing him at '09.

Hey girl, in my recent blog I mentioned changing my bow hold, I thought I remembered seeing your bh and so I came back and looked and yup, that's what I'm doing. I'm still messing with the pinkie, sometimes it hangs around the top of the bow and sometimes it drapes over.

Hell, half the time now I only have the thumb and first and third finger on the stick. Most of the time the middle and pinkie are off. As to how that happened, I haven't a clue. But my bowhold is more relaxed now than it's ever been, except when I'm learning something new, then it tightens up to ridiculous proportions.

I hear ya, it seems sometimes that the only thing holding the bow is air, and the next time on something new or hard I've got a death grip and the bow is turning blue and gasping.

When you accidentally let your bow fly across the room, then you know you have issues. hehhehe

'"Burl Hammons - The Fiddling of Burl Hammons" - Where to find?' 1 day