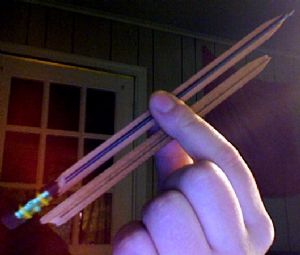 You're  hard on pencils as well as French toast.  I hope that you are not so hard on musical instruments.

I'm not! I'm very careful with my instruments... my rosin is another story... :P And I didn't do anything to that pencil... it just broke of its own volition while I was taking a final. I wouldn't be posting all these un-fiddle-related pictures here if photobucket could be relied upon, but often it seems to hate me, and won't upload my pictures.

So what's the deal? Are you going to convert that pencil into something special, like you did with Sven?

Actually, it did occur to me that it could become a tiny Native American style flute... :D

'Still working on moving back down south' 1 day

'Will slurring help me to play faster? - Fiddle Lesson' 2 days

'Will the Circle be Unbroken...featuring my daughter, the opera singer' 3 days