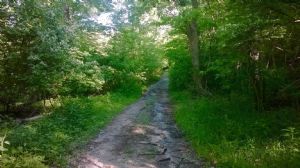 Heading back up the hill toward home

11 comments on “Heading back up the hill toward home”

I miss the woods up there....the Oaks, Hickories, Tulip Poplars, Sycamores, Maples, Beeches....is their alot of Sumac around where you live?

Yes, tons of sumac, redbud, oak ( not as much white oak as the red oaks... Down in the mountains it was more white oak), maple, sycamore, ash, buckeye, tulip poplar, basswood, etc. Some sassafras, dogwood, and mimosa, but not nearly as much as what was down in the southern counties.

Lots of black walnut, some hickory.

Probably not as much because all that country where your at up in northern Kentucky is old settlement, been logged many many times over the years. Red Oak is good to, Kentucky has both southern and northern, sometimes in the same stands. Black Oak to, alot of that out in the western part of the state, White Oak too and Hickory....great for making chairs and tool handles! I love the Oaks they are my favorite. There's a big one out back behind my grandparents house that has a big hook drilled into it. We'd go out their and clean catfish or fish, or whatever other critters....it was "the slaughter tree" LOL

Yes, thanks, Eric. Interesting. We have plenty of tulip poplars here too...I thought the Ky Coffee tree was the state tree. We've got plenty of Catawba trees too, we call the Indian ceegars!

One tree I miss from the mountains is scrub pines...I haven't seen them here, but we see them on the trip back down about where the cudzu starts.

Scrub Pines I don't remember...I dont think the western part has those? Other than Cedars, not much Pine in western Kentucky although you do see some of the southern Pines in very small spots in little groves but it's very rare until you get down towards more southern and southwestern Kentucky, then it's more prominent. Lot's of folks have magnolias in their yards though. We do have Cypress swamps around Owensboro and Henderson and also over in far western Kentucky, lot's of southern Pine, Cypress and Kudzu. In some ways, far western Kentucky reminds me of parts of Georgia or west Tennessee than it does Kentucky. It's very unique from the rest of Kentucky, not only Tobacco/Corn but also Cotton in spots.......Have you ever visited over there?

I think every part of ky is unique...very different than the other parts, but still got a lotta ky. We have cedars galore up here, but they weren't as common in the SE parts where we lived. There was tons of hemlock and mountain laurel down there...I haven't seen a hemlock or mountain laurel up here, but there are magnolias in people's yards, related to mt laurel. The tulip poplar is really a kind of magnolia, not a poplar. We have cottonwood trees galore up here too, plus plenty of box elder. They have a local thing around here called a Bradford Pear...a flowering pear tree that doesn't have pears. When I first came here, had to leave husband and daughter home for the first few months because we were very poor and I was basically a wandering, hungry, homeless person, with a new 5.36 per hour job and benefits we were so happy to get...I wandered, scrounged, saved my checks so we could find a place to live and relocate...anyway, I worked in the university library, and if course did NOT fit in and all, but too socially stupid to know I didn't fit in...and they were discussing the Bradford pear trees on the plaza university level, just outside the main entrance if the library, one time at a library-wide meeting. Well I'm tellin you, I was HUNGRY back then, and I timidly raised my hand and asked politely if the pears were fir the taking, or what did they do with them...because I had in my mind the idea if it was legal ud gather a bunch for me to eat! Well the laughter at how stupid I was to think a Bradford pear had pears...I was pretty confused, and shocked, not to mention hurt. And I didn't handle it well...I said, after the laugher and ridicule died down, something to the effect that if you ask me what's stupid it'd be growing a pear tree that didn't have pears, right up there at the top of my list...lol. So, yeah, there are tons if those Bradford pear trees all over everywhere up here, just to keep me reminded how stupid I am...lol.

Gosh don't be so hard on yourself! I've heard of a Bradford Pear and I know folks plant them along their driveways or out front, but you know, I thought they had a little fruit too! You just came up from SE Kentucky where their weren't any. Folks can be so downright ruly, unruly and rude and just plain mean. What the heck is wrong with Northern Kentucky LOL, Must be all those smart alec Ohioans and Hoosiers who think that just because they live on the south side of the river now they are better than anyone else!! Western Kentucky has alot of Box Elders and Cottonwoods too....that's cause of those old farmsteads, they get grown up and usually Cottonwoods take over with Elms, Elders and Willows, Locusts and stuff. That part of the state is really old and been logged countless times and overfarmed. Even so there's still some pretty good timber in a few places I'll bet but it's one of the areas with earliest settlement. It'sd an old part of Kentucky.