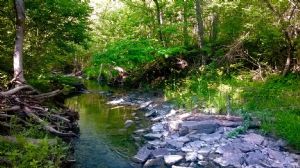 Morning walk alongside the creek

5 comments on “Morning walk alongside the creek”

Does that run into the Licking? Up in northern Kentucky I guess it's kinda rocky isn't it? Not much clay, kinda hilly and rocky? Western Kentucky is on the hillsides in some spots but usually kinda a reddish/brown clay....a heavy clay. It's grat for making bricks, used to be a big brick making industry over there.

It's rocky here and we have clay. The clay is gray...they have that red clay in TN. It's salty here...I think it used to be salt extracting country, back in the Native Anerican and early settler days. That creek eventually ends up in the Licking.

Gray? wow that's weird. When do you start to see the reddish clay like in western Kentucky or southern Kentucky? Probably have to get doen towards Lexiongton more no?

No...it's still pretty gray until southward of Jellico, on down into TN.

Interesting, I need to travel more over that way.......western Kentucky has a sort of reddish brown clay, especially when it's wet, then it get's more brown as it dries. However in Owensboro ( which used to be a Buffalo Trace ) near the river it's almost like tannish yellow....ironically, as frontier settlement Owensboro was originally called "Yellow Banks" believe it or not. As you get towards the Green river heading southward towards Bowling Green the clay get's very reddish, almost like Georgia clay to be honest. Far western Kentucky is that way too, except at Kentucky lake....a bit rocky in spots there. ;)

'How to Improve Your Bluegrass Fiddle Skills' 10 hrs