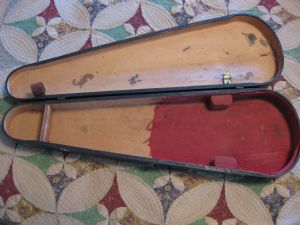 Cool looking, but that lack of padding in general and suspension in particular explains why old fiddles are generally found in need of repair! My 1885 H.H. Heskett was definitely kept in a beast not unlike this one, and it explains the damage to the treble-side corners. They were worn down almost to the purfling, no doubt from being carried in a padding-less coffin case in the late 19th century.

Be careful actually using one, particularly if you plan on travelling with it! If that case somehow tips over, with nothing to fasten the neck down the bridge is going to be driven right into the fiddle top when it hits the inside of the case. Similarly, there's no neck support in those old cases: if the case drops on its bottom, the fiddle neck might be split in two or snapped off the body due to lack of suspension.

Very cool to look at, but I'm, keeping my valuable fiddles in their Bobelocks (and Calton, for international travel).