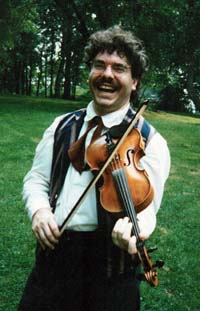 Back in the '80s and early '90s, I played a lot of "Living History" gigs and reenactments at museums and historic sites throughout New York City and Northern New Jersey. Here I am done up as an 1840s fiddler to play a 19th century dinner at Richmondtown Restoration (now Historic Richmondtown), a historic village in Staten Island, NY. The photo was shot by Ridley Enslow, a fellow New Jersey fiddler who got me started doing "funny clothes" gigs and was my musical partner for many of these "Living History" jobs. Around the time this photo was taken, Ridley and I, together with master violin maker Sam Zygmuntowicz, entered The New Jersey Old-Style Fiddlers' Contest at the NJ Folk Festival as a Swedish spelmanslag (fiddler group). We called ourselves "Sex & Violins" and played old-time Swedish fiddle tunes from the province of Dalarna in the style of the American Spelmans Trio. Surprisingly enough, we took 1st place that year! (Photo by Ridley Enslow)

'The Origins of Bluegrass Music' 1 day