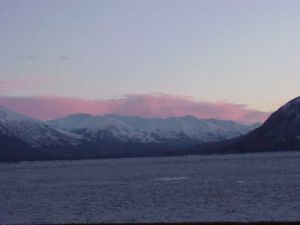 If you turned a 180 from where I took the picture of the ram - this is what you would see.

4 comments on “Across Resurrection Bay”

Haven't seen an Orca. But we've seen plenty of Beluga whales, and I stopped once and helped a bunch of others get a small Humpback whale back into the water. It was a "baby" that had beached itself somehow. Fish and Game said they wouldn't come out - because the same whale had already been rescued after beaching itself 3 times over the past couple of weeks. But we decided to free it anyway. THAT was a job! It was over 10 foot long and must have weighed several hundred pounds. But after about 45 minutes we got her done. I think I got pictures of that too...

We have huge tides here. And at times - it look like you could walk across the Bay - but that would be a mistake.

You are inspiring me to post some pictures. I'll have to sift through some of mine. Today I had an elk herd 25 yards from my front porch, and right now I have several pairs of swans out in the field. Thanks for posting your pics.

We do see ducks in the creek behind us, and we see plenty of bald eagles out back too. And we always see plenty of Canadian geese around the city each year.

We do see swans, but not in large numbers.

Up on the slope I've seen lots of brown bear, Caribou, and even a small herd of Musk Ox (that was a real treat - because it is so rare). But that's up north.

'How to Improve Your Bluegrass Fiddle Skills' 9 hrs