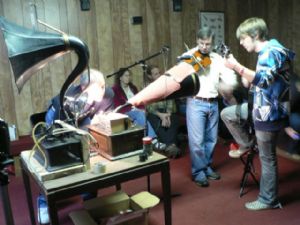 Cole and I playing into a wax cylinder machine owned and operated by Martin Fisher.

Cool. A teacher of mine at Auburn Univ. had a couple of these also and a lot of the cylinders. Seems like he lived in Loachapoka, AL, just outside of Auburn and he had almost a museum of old machines and stuff. I can't recall this guy's name.

I wasn't as musically active while at Auburn, except the obligatory late nite guitar-pass-arounds, so I missed out on that scene. I did take a few classes from a jazzer in the music department, Bob ??? He was a Barclay man I recall. I understand there's an old-time underculture bubbling down there, and there's always been a bluegrass movement too. Do I recall a bluegrass band called the Loachapoka Syrup Soppers?

Great name for a BG band out of Loachapoka... We had a German teacher in industrial design (my major) who used to refer to something as being "Loachapoka" meaning hokey or redneck. :)

I played alot of guitar at AU and did some open mike nights at Darnelle's (I think that was the name). It's no longer there. Used to go see Muse alot. They played all the acoustic stuff I played on guitar. Fiddle/mando didn't come until much later. Did a few late night jams as well. One of my buddies lived in the upstairs of that Episcopal Church there on Magnolia Av. and we jammed there LATE a few times. Roudy... Those were the days.

Those are my stompin grounds. Chambers County, just east of Lee County.

Darnelle's? I remeber Denaro's on the corner having local music? Oh, and the Loachapoka band had a different name I can't recall. The OTHER bluegrass band was the Saugahatchee Syrup Soppers. And there was "In Cahoots" which was associated with Alpha Psi, the Ag Engineering fraternity.

Darnelle's was a coffee shop and sold a ton of imported beers. it was down the block from Denaro's, down close to the theater (maybe next door to the theater that was on the corner). They had a weekly open mike.

Well ain't this the Alabama ol' boys network! I drove through Alabama once. Can I join?

'Another win for Strum Machine' 1 day

'What a difference a day (7years) makes' 2 days