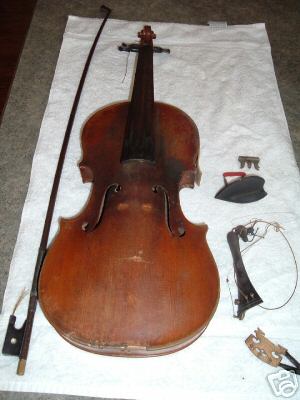 Photo of Old Fiddle on Ebay

Don't know what made me bid on this fiddle but something in the ebay description made me.

6 comments on “Photo of Old Fiddle on Ebay”

Is this the one you refinished?

I did not refinish it. I just cleaned the old caked rosin and grime off the top, which took a few hours of soft cloth rubbing with some Hill Violin Cleaner (which smells like it has a small amount of turpentine in it). The cleaner gradually softened the old rosin and the existing varnish began to shine. I also took the top off and reglued everything. One of the things I noticed when bidding on the item, even as ugly as it was there were no cracks in the top. Another clue to me was that I appreciated some linear groves on the neck. From this I concluded that at one time it had been played extensively. Its rare that someone would play a crappy violin to this degree. I would not advise refinishing a violin top.

But yes, this is the one in the other pictures. Thanks for the interest. I love talking about old European fiddles.

So did this violin turn out to be "crappy"? Have you played it how does it sound?

No it turned out great. The other photo in this album is the finished fiddle. It is one of the best fiddles I've ever played. Have you ever had an ebay fixer upper?

No I have never had an ebay fixer upper. My husband is a carpenter and was wanting a project. I thought refurbishing an old violin would be a fun project for him. Great idea.

'Another win for Strum Machine' 1 day

'What a difference a day (7years) makes' 2 days