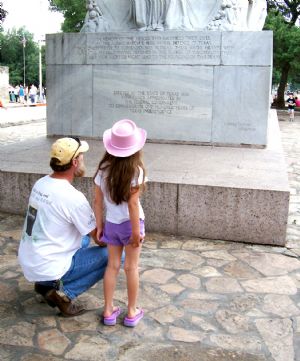 9 comments on “Teach the young”

What a cool photo, and later in life she will remember this! Gee, traveling from Maine to San Antoine is a momentous occasion! Oh, she's a cutey too! Is she wanting to learn music from you?

Thanks Terri. I lived in Austin for 2 years and recently moved back to Maine. My daughter (her mom) plays piano and sings wonderfully so maybe it's in her DNA to play something. Dig the pink cowboy hat!

You're right Deckda, and with the books, of years lived, in between.

But I don't see the shotty and the cabbage is aten I guess? ;D

I'm first generation Scots / Irish, and was amazed on my first visit to the Alamo (1983) how many Scots and Irish died there. Very moving. Took my wife of four years (and son of 17th months) to the Alamo in 1992, and then we visited as a family in 2002. By that time, we had two, and both kids had grown enough to appreciate what it stood for. No matter where you are, heritage matters. We live in a part of Scotland where many of our Presbyterian forefathers gave their lives for the sake of religious freedom in the 17th Century. I honour them for their courage, as I do all true patriots.

You can' t beat goin' around with your kin folk, to places of interest.
As they 'll be old enough to remember this in later life...
And of the good times being out as a family...
And the history lessons...
'appy pickin'

'Let there be fiddles to fill the air! Last night my dream came true...' 3 hrs

'Not exactly fiddling, but I intended to put fiddling in it...' 5 hrs

'Problem with A String help' 1 day