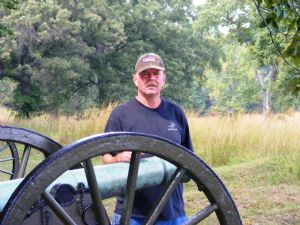 Me, standing by a cannon on the part of the Confederate line at Fredricksburg where my Great Great Grandfather's unit fought. He was in this battle Corporal Columbus F Swaim, 9th Battalion, North Carolina Sharpshooters, Co B. Later he was a Lieutenant in 2nd Battalion North Carolina Infantry, Co G. When I visit battle fields he fought at, it is quite a feeling to look across the field and wonder what he saw there, and what that day, or days were like.

Fredricksburg was a horrific battle especially for the Federals. Was the 9th part of Jackson's command on the Confederate right? I have a breastplate from a Union soldier found on the Fredricksburg battle field.

Yes, the 9th was part of Stonewall Jackson's command, and they were just about in front of the railroad tracks where they start to curve toward the Southern line and go to the right. It was where the Federals broke through the Southern line, and were later repulsed. This pic is about at that spot.

I was there a couple of years ago. Most of the attention to that battle is given to the fight at the stone wall below Marye's Heights but if the Federal breakthrough of Jackson's line had sucseeded, the entire Confederate line would have folded. You are fortunate to know of your family history and should be proud to be the decendant of a Civil War veteran!

'How much Influence does the bridge have on the sound quality of a violin?' 1 day

'Chinquapin Huntin', slow and easy in the key of FCFC' 3 days