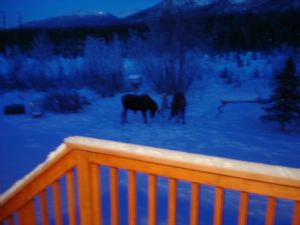 We've had the good fortune of seeing this in our backyard on 2 different ocassions. 2 years ago, there were 3 cows and 3 bulls in the backyard. All 3 bulls were testing each other. Unfortunately, both times it was fairly dark and the photos haven't turned out so well - yet.

When my folks lived out in the middle of nowhere in northern BC, they said the moose were the most dangerous animals they kept an eye out for while working in the woods. I've only been around one once, when one came trotting into camp a few years ago in central ID. You guys feel like you have to keep an eye out, or do they take off if you're out in your yard?

We see several through the year. Just last night, we had a bull in the back yard - chowing down in my wife's flower bed. I shewed it away by banging a bucket down on the porch handrail. But there have been times I have been down there with them and had a broom swinging, poking, and yelling at a cow 20 feet away, and she looked at me like I was insane (I was) - she wanted to ignore me (more interested in the meal she had found) but she did eventually move on (I was the bigger pest and more persistent than she was) . They certainly aren't tame, and they can be dangerous when provoked or cornered - but for the most part, they understand you aren't a threat, so they ignore you. I think they become more dangerous when you do something they aren't use to seeing humans do, or if you surprise them. In the wild, and on their terf, maybe a different story. It's next to impossible to grow a garden without fencing it in. They are beautiful animals, but a real nuisance when they are in your yard tearing up your stuff.

I would have to say that the black bear is the biggest danger. I could tell some stories about them too.

Thanks. Keep the pictures coming...I really enjoy them.

I got a picture of an albino moose a friend took - I didn't see him. But the pictures are cool. I'll try to find it.

Great photo. We have moose in our yard quite commonly. The cows are unpredictable and very dangerous, especially if they have a calf with them. I like seeing them off in the distance, or in someone else's yard! Thanks for sharing.

'How to Improve Your Bluegrass Fiddle Skills' 11 hrs