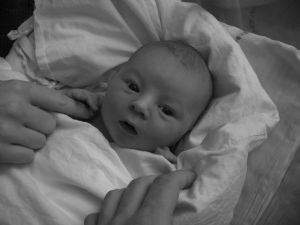 What is his name?.

Here he has just arrived a lively little fella. He never crys except when he is hungry or when he's made dudu. We still haven't got a name so feel free to chip in with suggestions and remember that there is gonna be Holmes at the end :) I use to play for him while he was still in his mothers womb. When I played for him after he arrived he liked it and smiled. In general he smiles alot. I am very proude and happy.

Congradulations, Jamie! He's beautiful! Name him anything but Sherlock. :-)

Congrats! Now I imagine fiddlin is going to take a back seat for a while - at least till he gets his own stick!

Hehe yes a little. But he is actually pretty easy going and he has been listning to me play while he was in his mothers belly so he is kinda use to it and knows the tunes.
I see him tapping his foot all ready ;D

We landed on Oscar Holmes. :)

I will I promis.

'Will slurring help me to play faster? - Fiddle Lesson' 3 hrs

'Will the Circle be Unbroken...featuring my daughter, the opera singer' 23 hrs