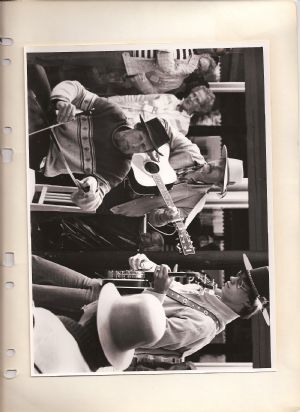 12 comments on “A Loggin`Man in Action”

yes, thats a real Loggin`Man right out from the forest playing a saw, at the Folk Music Festival in Finland, He told me that You cant play with any saw blade, just few of them have a sound which is required, I play Guitar behind him at the photo, we have a "Foggy Mountain Top" going on . He plays with a Violin Stroke, awesome sound, you need strong Loggin `Man hands to this.

Ozarkian D.L., not az hard to do az nailin` a raw aig to the wall

now waderin` around on nature trails in the Ozarks iz definitely off-limits
`n yawl furraynurs will be well advised not to stray frum that beatun path
if``n yuh don`t want to be mistook for a revahnewah !

Good stuff there...I have been pluckin my 5 string a bit lately too...

Oh, Aarto Viljamaa joined your jam, awesome! haven't seen him in a while...

thats it ! now I know his name also, thanxs oart. I think He ordered these saw blades made for Him especially, and these blades were delivered without saw teeth. just the Blade, a very beautyful tone on it, played with a Violin Bow.

yep, there is a saw factory who makes these babies, they are called speliplari.
www.pikatera.com

Thanxs Arto, I will most certain order one of these, it was an extreme sound in them. How did you like your Tour in Norway ? No saw blades out there ? just IceBear`s & Good Music.

My best friend, a preacher, plays musical saw in our celtic band. He is good too! Sounds like a lady singing, and can be haunting. He has different sizes, and uses a Cello bow.

yes, this is what I mean with show business,its the most important part of Entertainings. and the sound may get very haunting, youre right about that.

'Did I do a good job of tabbing this fiddle tune?' 4 days

'Them was the last two biscuits' 5 days