Please note this is an archived topic, so it is locked and unable to be replied to. You may, however, start a new topic and refer to this topic with a link: http://www.fiddlehangout.com/archive/52863

Acuff's father Evart was a fiddler, and built his own fiddles. He began his first one in 1922 and used tools that were made by his great uncle Lafayette "Fate" Cassady, who was a blacksmith and Civil War soldier. Fate challenged Evart that if he could make a fiddle, he could have his tools. Charlie began playing in the 1930s and from then on used fiddles made by his father. e sure to watch the video all the way to the end to see a photo of Evart Acuff with his first fiddles. (Source for all above information: Ancestry)

The following is from Acuff's obituary:

"Charlie was famous in old-time Appalachian music as the 'left-handed fiddler.' In 2005, he received a Tennessee Governor's Award in the Arts. The award noted that "Acuff, known as a first-rate musician and humorous storyteller, comes from a long and distinguished musical family tradition. For 70 years he has played fiddles hand-made by his father, delighting audiences with tunes passed down to him by his grandfather.
An article in the Knoxville News in 2005 said, 'While Acuff never pursued music full-time, he made a name for himself when he joined the Lantana Drifters band in 1989. The band began winning musical competitions at various festivals throughout Tennessee and won first place in the old-time band category of the Uncle Dave Macon Days on four separate occasions.' He was a musician in residence at the Museum of Appalachia in Norris, Tennessee, for over two decades."

Josie Girl is perhaps better known today as "Josie-O" (as Art Stamper called it), and seems to be a popular festival tune. A josie is an archaic article of women's clothing, something along the lines of a cape. There are lyrics associated with the tune, generally sung to the C part, and then going into the A part:

Be sure to subscribe to my YouTube channel and join Paul Kirk's Old-Time TOTW group on Facebook to keep up with new posts and discussion: facebook.com/groups/33100... 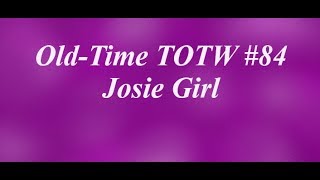 Nicely played. Thanks for that tune, Paul and friends.

More and more I wonder about if we met him at the Appalachian Museum in Norris, many years ago. We have a house there and have spent years working on it to get it back to living shape again, and I can't remember what year it would have been, but it was around Christmas time...very cold. We had worked ourselves to death and then decided to go to the museum and spend a little time there to wind down. In one old cabin they had a good fire going, and it was really cold...the museum being a mostly outdoor museum, we were happy to spend a little time in a warm cabin. There was a fiddler in there...an old guy and he had a nurse with him because he wasn't allowed to be there on his own.

I've never followed famous musicians, so I wouldn't know who he was and fogot his name and all of that...I didn't know any famous musicians at the time...know more of them now because of hanging out on music forums where people talk about them, etc. I've never bought CDs or listened to them or any of that, I just always liked to just play on my own. So anyway, he didn't say if he was famous or not, and all I knew about him was he was playing a fiddle.

This was back before or maybe right around when I was getting myself my first fiddle...so somewhere around between 2006-2009 or so, somewhere in there. Anyhow...he was so happy I said I was trying to learn all I could because I wanted to start playing the fiddle...he just wouldn't let me go.

So husband and brother-in-law went on to look at other stuff and I sat there with him and his nurse while he played and played...stopped giving a lot of great pointers along the way (wish I'd have had a pen and paper...lol...but I was soaking all that good stuff up as best as I could)...asked me questions, encouraged me to ask him...ask anything and he would spend a lot of time illustrating and showing me...I mean, it was a long, very extensive and detailed fiddle lesson...lol...FREE. There just weren't many visitors at the museum that evening because it was so cold. So...just me and him, the fiddler, whoever he was.

I have since wondered if it could have been Charlie Acuff...I don't know. I was too in-the-dark about famous musicians to have known anybody except Doc Watson at that point...I just never listened, never bought CDs...just didn't know who was who, jsut that I personally liked to play. So...I often wonder if I got a lesson from this guy...or else somebody who played very smooth and nice and was more than enthusiastic about passing it along.

Anyway...whoever it was...I still think back on it and appreciate his generosity and sharing and helpfulness.

But thanks for sharing another great tune, regardless of all my musing...lol . Great job, Paul.

Thank you, Peggy, and thank you for your story, I really enjoyed reading it

Peggy, it's very likely that it was Charlie Acuff that you met there! I know that he used to play at that museum, and from your description, especially the "he just wouldn't let me go" part, and his friendliness and generosity, it sounds very much like Charlie. I met Charlie at the Fiddle Tunes festival in Port Townsend, WA in 1996. A few years later, my wife Maxine and I visited Charlie and Dorothy at their home in Alcoa, TN. When it was time for us to leave to get back to where we were staying across the mountains in North Carolina, he really didn't want us to go, and kept pulling out more unusual tunes on his fiddle, and even followed us out to our car with fiddle in hand, cajoling us to stay longer! We felt bad that we had to go, but we had a long, mountainous drive ahead of us and it was getting dark. I'm sad we never were able to get back there again for another visit, but I have sweet memories of them both, and of their warm and welcoming personalities.

That's such a cool story, Brendan! Cool that you got to spend time with him.

Of course, one thing to realize is just about everybody in that area acts that way...lol...so it could've been any ol' fiddler guy I was sitting there with, or maybe hijm....guess I'll never know, but I picked up some good tips that I was able to remember.

Back in SE KY counties there used to be a saying among the older generation...it would've been the generation that raised the World War One generation...that one...from way, way back...if you started to get up and leave after visiting with them, you'd say , "Goodbye," or " See you later on," whatever...and their parting expression would be, "Better just stay."  They'd walk you outside the door and be waving the whole time as you left, "Better just stay...well...better just stay!"

I love the stories...really brings life to people who didn't know them, or those who didn't have the chance to meet them. Thanks Peggy and Brendan!

I began playing at the museum with Charlie when I was about 12 years old. He was everything that has been previously stated. He was plenty old enough to be my grandfather but we were great friends and if you were to have stripped us of our musical ability we wouldâve still been great friends - it wasnât just a musical connection he Just had a way of drawing people in. With the exception of January and February there were 2 musicians either on the porch or inside the cabin by the fire. Most of the folks besides me were retired and played a couple of days per week. I guess Iâve known everyone who ever played there regularly. There are a couple of other possible people who fit your description in addition to Charlie. If the fiddler didnât have a musical partner it couldâve been Jim Russell. Jim wasnât in the rotation with the rest of us but he played several days a week when his health permitted. If you want to dig deeper Iâve got plenty of pictures from playing there over the years and Iâd be glad to help you get to the bottom of your mystery fiddler.