Locke was described as a "gipsy fiddler" in Leominster, but a 1939 register lists him as a general farm laborer. His brothers James Isaiah, Bert, Ezekiel, and William were all "travelling musicians."

John Locke was visited on 27 December 1909 by folk song collector Cecil Sharp. Sharp appears to have met up with him at the White Horse Pub, 39 West Street, Leominster. Cylinder recordings were made that day, and then Sharp notated ten tunes from those recordings. The recordings do not seem to have survived.

John Messenger made a compilation of tunes from John Locke and William Preece titled "Some Tunes Collected from the Leominster District." Messenger mentions that Sharp visited the Leominster area because he was in contact with Ella May Leather. Leather had heard Locke playing fiddle with his brother at Pembridge Fair in 1908. Sharp traveled to Orleton with Leather to see a morris side on Boxing Day 1909 and met a Mr. Tril whom he visited again a few days later.

"Speed the Plough was written in 1797 by John Moorhead for a stage show in Covent Garden (where he worked as a violinist), but has been widely adapted and modified since then."

Other sources do not agree about the origin of the tune, siting dates earlier than 1797. The tune is widespread throughout England, Scotland, Ireland, and the United States, and is played as a reel, strathspey, hornpipe, or breakdown depending on performance practices and tempo. The title appears to be a shortening of "God Speed the Plough," which would indicate good wishes for a successful harvest after sowing seeds and crops.

The tune is not related to John Salyer's Speed of the Plow which was featured for Old-Time TOTW #24 on 12/9/18: https://youtu.be/bePjTcfQSLY?t=65

Messenger notated Locke's Speed the Plough in G, but notes that the original was in the key of A. Locke played the tune square. I chose to play the tune slightly crooked in cross G (GDGD). That tuning allows for some nice drones and works very well.

Joining me are friends Stephen Rapp on banjo (Kent, OH) and Jean and Jeff Getz on bass and guitar, respectively (Pittsburgh, PA). 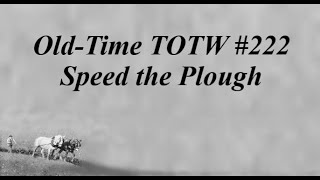 Ever notice how much this sounds like Whisky Before Breakfast? Great tune ,well played!

Ever notice how much this sounds like Whisky Before Breakfast? Great tune ,well played!

To me, it's that short sequence of  descending 3rds that evokes WBB.

'The phrygian or klezmer scale' 4 days