Ashby began playing fiddle at the age of eleven in 1926 and was influenced by his uncle Joe, John Sullivan (from whom Ashby learned the tune Johnny Don't Get Drunk), as well as neighbors Walt Graham, Cy Kines, and John Sinclair (from whom Ashby learned the tune Rattlesnake Bit the Baby). Some of John's other influences were the Crook Brothers and the Skillet Lickers.

Around 1940 Ashby formed The Free State Ramblers which was a band made up of family and friends who were musicians. The band lasted to about 1956. Early on they competed in their first fiddle convention in Front Royal, and John won first place. John and the Ramblers played at Constitution Hall from 1938 to 1943 for the National Folk Festival. In 1946 they traveled to Cleveland, Ohio, and won the band competition. After winning another contest sponsored by Connie B. Gay in Warrenton, they played occasionally over Connie B. Gay’s radio show on WARL in Washington, DC, from 1947 to 1949. They would travel from Warrenton to Washington, play two to three numbers and head home. Moffett tells about the time they were hired to perform at a major hotel in Washington, DC and dressed in the stereotype of country musicians by wearing overalls instead of their usual suits. When they got there, the doorman refused to let them in, until they finally convinced him that they were hired to perform. In the Warrenton area they played for dances at places like the Rockwood Dance Hall in Warrenton (now McLanahan’s Camera Shop), the Cliffton Fire Hall, and Midway Hall in Bealeton. Dances went from 9pm to 1am, and they made $10 a person.

"Free State" refers to a twelve square mile area near Warrenton, VA, that declared itself free in 1806. This meant that they refused to pay rent or taxes to land owner Chief Justice John Marshall. Residents shuttered their windows at night to protect themselves from gunfire that erupted regularly over disputes. Residents were said to take the law into their own hands. Ashby is said to have composed the tune Going (or Gone) to the Free State.

Though Ashby played music every weekend for house parties and dances, music wasn't his sole source of income. He farmed and worked as a carpenter. On the staff at Airlie estate for about 11 years, he worked with other Free State craftsmen to renovate the buildings. The founder of the Airlie Foundation, Dr. Murdoch Head, remembered him as a man of “quiet dignity, good humor, and absolute integrity” (Burrage, 1975).

In the 1970s, Ashby made three albums for County records. Accompanying John Ashby were cousin Richard Ashby, Ashby Kyhl, or Skip Ashby on guitar or bass, Ronnie Poe on banjo, and Jack Frazier on bass. "John Ashby and The Free State Ramblers, Old Virginia Fiddlin", was released in 1970 (County 727); "Down on Ashby’s Farm, Fine Old Fiddle Tunes" was released in 1974 (County 745); and "Fiddling by the Hearth" was released in 1979 (County 773). In 1978 Ashby won first place for old-time fiddler and best all-around performer at the Galax Old time Fiddler’s Convention.

The tune is also known as Jaybird Died With the Whooping Cough and Here Comes Jack With a Fiddle on His Back (a variant from Kentucky). Charles Wolfe states that printed versions of the song/tune date as far back as 1847 and that the tune has been widely collected from both black and white sources.

Kellie can be found at the following links: https://www.facebook.com/GnarlyDuets and https://kellieandpete.net/?fbclid=IwAR0_EUj4g5QYFlz6O3-jVK1VjLs9WmZG2iiiPbaUash9GQSIuB2eInw40n0 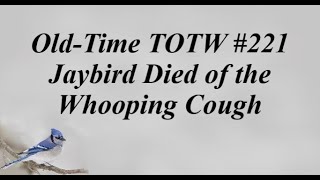 I enjoyed that. The groove pulled me right in.

I was expecting a different tuneâ¦This one sounds a lot like Shoot the Turkey Buzzardâ¦yâall sure do have a great groove going there. Nice fiddlingâ¦nice tune. As always, great tune and yâall sound great.

I was at a jam last weekend and someone called for this tune. I thought he was pulling our leg!