His father William was a fiddler. When Clyde was nine, he made his own fiddle from barn boards, using hair from his family's mule for bowstrings. He began playing fiddle tunes that he had heard his father play. Not long after, he became interested in the banjo, an instrument that his father also played.

In his mid-teens, Davenport first heard the music of the widely admired fiddle and banjo duo of Blind Dick Burnett and Leonard Rutherford, perhaps the greatest single musical influence of his life. He particularly admired Rutherford's long-bowing technique, which was typical of the region. About Burnett's playing, Davenport said, "It was just like it was greased. There wasn't a scratch or a noise of no kind. Just clear as a bell...." His attraction to Rutherford's technique led him eventually to make the fiddle his instrument of choice, though he was also widely recognized for his old-time clawhammer banjo playing. The traditional fiddling style of his region is solo, and often the fiddle is cross-tuned. In addition to solo tunes and quick-tempo breakdowns, he played the fluid blues in the style of Rutherford. Unlike many of his fellow old-time master fiddlers, Davenport was not a contest fiddler.

In his musical memory he kept more than 200 fiddle tunes, many of which are rare tunes learned from his father, grandfather, and fiddling neighbors of earlier generations. Davenport's father attributed much of his own repertoire to a local man named Will Phipps, who was born in 1829.

Davenport covered a lot of territory in his life. After serving in the Army, he worked in Indiana auto factories. When he returned to Kentucky, he took up farming and ran a truck stop. Intermittently throughout his adult life, Davenport made full-time work of making and repairing fiddles. His reputation as an instrument maker and repairman, as well as his playing, made him the center of the old-time music world in central Kentucky.

Through his appearances at festivals, concerts, school programs, workshops, and music camps, Davenport educated thousands to the subtleties of old-time music. He believed that the music he learned from his father and neighbors was good and was meant to be shared with anyone interested in learning. He was an inspiration to many fiddlers, teaching them with unfailing good humor the musical heritage of the upland South. (all above taken and paraphrased from arts.gov site)

The tune has a delightfully crooked A part, and Davenport is the only known source for the tune.


Joining me is Stephen Rapp on banjo (Kent, OH)

Cleveland, Ohio area folks: I will be starting up a new jam at TMS (The Music Settlement) on the third Wednesday of each month from 6:30pm to 8:30pm. For more information see: 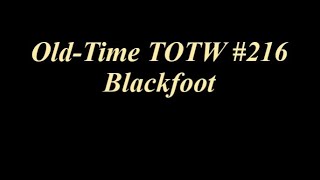 'Any direction on a decent Violin Bow to order online?' 3 days