Price is not a fiddler who is well known today, though he contributed many fine and unusual tunes to Marion Thede's The Fiddle Book, some of which appear to be unique. We have featured many of Mr. Price's tunes in the Old-Time TOTW series. For other tunes from J.S. Price, see episodes #36: Tulsey Waltz; #68: Tom and Jerry; #73: Custer's Last Charge; #107: Old Paint; #108, Haning's Farewell; and #119 I Went to the River and Couldn't Get Across (aka Old Aunt Mary Jane). Thede noted more details about Price than many of the other fiddlers she featured:

"Mr. Price's violin is a fine old instrument with an Italian coat of arms carved in relief on the back. He makes a wonderful picture, with his white hair, the old violin held in the right hand, and the left bowing arm high in the air when playing on the E string."

Regarding the tune, Thede states:

"An interesting example of the re-naming of a fiddler's selection is that of a tune brought from Texas by settlers in the region which is now Greer County, Oklahoma, and called by them 'Love Somebody.' This same melody in Illinois, Missouri, and Indiana is designated 'Old Lady Tucker,' and as such was transported to the Indian Territory [Oklahoma] from that region."

"The tune [Love Somebody] has numerous and old antecedents from the British Isles, including sets in printed by London publishers Robert Bremner (Scots Reels, 1757) and the Thompsons as 'Miss Fargiharson’s Reel/Miss Farquharson's Reel', and included in Northumbrian musician William Vickers' 1770 music manuscript collection as 'My Lover’s Butt a Lady Yett.'. In Scotland the tune is called 'My Love is But a Lassie Yet,' a version of which Beethoven arranged for orchestra. The melody is used for a country dance popular in England and America called  'The Cumberland Square Eight,' and in Ireland it is a polka called 'Tripping on the Mountain.'

In America a version of the tune appeared in print as early as 1839 under the title 'Richmond Blues' in George P. Knauff's Virginia Reels, volume II...In Arizona the tune is known as 'Old Missouri.' Thede's Texas tune is a fairly close version of the Scottish 'Miss Farquharson's Reel.'

Charles Wolfe (1991) says the tune is better-known in white repertory than black and that it was popular as a fiddle tune in middle Tennessee, frequently heard at the Grand Ole Opry in the 1920's and 30's. The earliest recordings of this many-titled tune by the 'Love Somebody'  title was by Uncle Dave Macon with Sid Harkreader in 1924, the Crook Brothers Barn Dance Orchestra (1928), and Luke Highnight's Ozark Strutters in 1928. A version was collected by African-American collector Thomas Talley (Negro Folk Rhymes).

There are a lot of old-time fiddle tunes that have multiple names, but I cannot think of any other that has more names than this tune. Some other names for the tune include Big Muddy, Buffalo Nickel, Chinky Pin, Darling Child, The Farmer Had a Dog, Fourth of July, Hair in the Butter, I Love Somebody Yes I Do, I'm My Momma's Darling (Child), Lead Out, Midnight Serenade, Missouri Mule, My Love is but a Lassie Yet /My Love She's but a Lassie Yet, Old Kingdom, Old Lady Tucker, Old Missouri, Pennington's Farewell, Richmond Blues, Sweet Sixteen, Ten Nights in a Bar Room, Too Young to Marry, and Yellow Eyed Cat. I cannot attest to how many of these names are commonly used today, but I do know that many are.

Joining me is Stephen Rapp on banjo (Kent, OH) 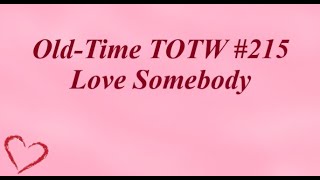 'Any direction on a decent Violin Bow to order online?' 2 days