Tucker is one of the earliest-born fiddlers documented in source recordings. Tucker’s brother, twenty-one years his senior and a Civil War veteran, also played fiddle. Young Stephen learned to play at age 9 or 10, and his tunes came from older fiddlers soon after the Civil War.

Like other fiddlers of his time, Tucker played for local frolics, picnics, and dances. He also participated in fiddle contests and won many prizes. Looking back on this at the age of 80, he said, “Reason I did [win contests] is I was the oldest and ugliest man.”

In 1939, Herbert Halpert, a young folk song collector from New York, with the help of Abbott Ferriss, a native of Mississippi, went on a tune hunt for the Library of Congress. This is where the field recordings of Tucker (and many others) came from. Halpert recorded twenty-four of Mr. Tucker’s tunes. Indian Eat the Woodpecker was one of them. (source for most of the above information: liner notes to “Great Big Yam Potatoes”). We featured other tune from Stephen Benjamin Tucker, Christmas Time in the Morning, for Old-Time TOTW #26 on December 26, 2018. https://youtu.be/qWO9jn3iVnY?t=65 and Indian Ate the Woodpecker for Old-Time TOTW #145 on April 4, 2021 https://youtu.be/S7-DyGXngpU

Joining me are friends Stephen Rapp on banjo (Kent, OH) and Sean Fen on guitar (Nowhere, USA). We recorded this tune in September 2020. 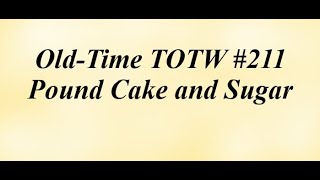 'Will slurring help me to play faster? - Fiddle Lesson' 10 hrs

'Will the Circle be Unbroken...featuring my daughter, the opera singer' 1 day