John Salyer was heavily influenced by his close neighbor, and later musical partner, Willie Fletcher (b. 1871). He learned many of his tunes from Fletcher and said him to be "the sweetest and smoothest fiddler I ever heard." His son Grover recalled "He [John Salyer] played for a lot of dances...I've seen him...playing for a hoedown dance and he'd jump up and dance and play the fiddle at the same time." Another fiddler friend of John's was William Hamilton Stepp (1875-1957). Several tunes that Stepp and Salyer played in common are remarkably similar, and it's very possible that they learned some tunes from each other. Salyer's son Glen said of Stepp, "I liked to hear him play. He was considered a good fiddler, and he was. He loved to entertain people...more than Dad did." There were fiddle contests now and then in the Magoffin area, but Salyer rarely participated in them.

Along with his two sons, Grover (1910-1994) and Glen (1914-2003), on guitar and mandolin, respectively, Salyer was invited by the Sandy Valley Grocery Company to be entertainers at the 1933 World's Fair at Chicago. The train started picking up passengers in Pikeville, KY and continued to Cincinnati, OH. They provided music on the train. The playing continued until they arrived in Cincinnati. There they were joined by the Gibson Girl singers, and from there to Chicago, they alternated singing and playing. When they arrived in Chicago at 10:30pm, they were greeted by a bagpipe band. They stayed at the Stevenson Hotel. The second night the Salyers were invited to play for a dance in the million dollar ballroom of the Knickerbocker Hotel. The dance floor was make of glass blocks with many colored lights in it. There were 6,500 people in attendance, and they wanted a variety of dance music. John and his sons played the music they knew and encouraged people to dance however they wanted to it

I wish to thank Bruce Greene not only for the above information, but for doing so much to collect and preserve so much history and the tunes themselves. Bruce Greene's website is BruceGreene.net

"It has been suggested (purely speculatively, as the assertion is without any supporting data) that the title refers to the brilliant and dashing Civil War era Brigadier-General Micah Jenkins (1835-1864), who perished in the battle of the Wilderness, 1864. Jenkins was from South Carolina, a graduate of the Citadel, and fought in many major campaigns during the war. He was wounded several times, and had to be transported to his last battle in an ambulance. Unfortunately, he was the victim of 'friendly fire.'"

The recording of John Salyer playing the tune at the end of this video is from Larry Warren's Slippery-Hill. Be sure to check his site out: www.slippery-hill.com

Larry does fine work by making many source recordings available all in one place. There isn't another site like Slippery-Hill.

Joining me in our recording is friend Jeanie Thieken on guitar (Hocking Hills, OH).

Jeanie, along with Nick Weiland and Mark Barsamian, play in the band Jeanie and the Dreamers.

Check them out at: https://www.facebook.com/jeanieandthedreamers/

I would like to thank my newest Patreon memeber at the "Fire on the Mountain" level, Catherine, and I'd like to thank a current Patron, Karen, for signing up for the "Great Big Taters" level! 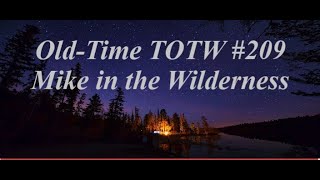 'Over the Waterfall' 11 hrs

'The Clouds are gonna roll away' 1 day

'Playing by yourself' 1 day