Mills was recorded by Armin Barnett in 1972. He valued his privacy and said to Barnett, "If anyone asks about me, tell them I'm dead." He was blind in his right eye according to his WWII draft registration.

Since the Mills family were private people, it is not surprising that this is all the information I was able to find out about him.

Halifax is the capital of the Canadian province of Nova Scotia, but it's more likely the name refers to the town in Halifax County, Virginia, along the Banister River. It has a small population of 1,309 (2010 Census) and is the county seat of Halifax County.

The tune reminds me a lot of Green Mountain from Isham Monday of Monroe County, Kentucky.

This video is of a late night jam at Crook Farm Old Time Music Festival which took place in September 2021. Many thanks to Jeanie Thieken for capturing the moment and sharing her recording. 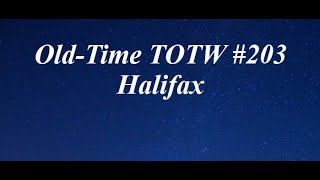 'Okay, Teacher types, How do you train to hear a chord change?' 3 days

'Have you seen these fiddlers?' 3 days