The great and mysterious Bob has spoken...fiddle tune for April

Hey everybody, Bob had some upgrades since last time so his choice was extra gripping and powerful. So anyway...I hear a drumroll in the background...let's see what Bob and Roro give us for the Virtual Fiddle Festival in the month of April...don't forget, you can hear the tune played and also have a free jam track (fast or slow) on Oldtimejam.com if you want. Good luck with the tune this month and let's have some fun!

Good tune pickin', Bob and Roro!
(I never heard of this one...as usual...:-/
sounds like you know it already, Peggy!)

Bruce Molsky, playing with John...:-)
Somehow he always sounds like about 3 fiddlers playing at once...

omg...well...gonna be a tough act to follow after Bruce Molsky...lol. Awesome fiddling there! Well come on guys, we can do it pretty doggone good too...(I hope)!

Bruce Molsky, playing with John...:-)
Somehow he always sounds like about 3 fiddlers playing at once...

What fiddle tuning does Bruce use on his version?

Lookin' at his fingers when he's on the lower register/octave, it looks to me like he's probably tuned AEAE.  Hard to se though.

I kinda agree with that?
His fingers on the top two strings A, E kind of match when I play...and there's really no reason to tune out of those, they sound nice and are easy to play as is.

Well Bruce M could probably handle all of it either way without a struggle...lol...but anybody who wants to jump octaves with ease and have helpful drones anywhere would probably do good to go ahead and cross tune, as B. Molsky apparently did. I've seen John Morris, Clay Co. WV fiddler, up and close in a jam one time when I went there...just one time...lol...but now I gotta say he stayed in standard and he could pretty much pass it off as cross-tuned...without any apparent problems...I don't think he played this particular tune at that jam, but on other tunes he was really good in standard...so...it's up to the fiddler how they wanna handle these things. I wouldn't say anyone should feel pressured to cross tune if they are functioning the way they want to in standard. For me, AEAE, or GDGD or any Sawmill tuning is a helpful thing and I use it even where other people usually don't. At this point in time I do that, anyway. The bottom line is have fun learning/playing the tune, any ol' way you choose.

Well I'm gonna give this cross-tuning thing a try. I can't resist the allure of those ringing, open, easy-to-play doublestops on the low strings...( so I'm thinking, you would tune your bottom string to an octave lower than your second-string A? And after that, to tune the third string, you just find the harmonic "fifth" sound like usual. So, not so scary of a tuning...LOL, reassuring myself :-)

Yep, it's AEAE. I got it. Fun tune to play. It would get very boring if it couldn't be repeated on the lower octave. Alas, the tuning explained.

I remember playing a Canadian fiddle tune (Joys of Quebec) for 45 minutes at a square dance for a Virginia reel, many years ago (there were something like 28 dancers on the floor) and I would have gone crazy but for coming up with the idea of transposing it an octave lower, live as I was performing.

I noticed how cleverly Bruce weaves in and out of playing it an octave above, then below and then splitting the octaves. I like it a lot when he splits like he does. It makes a simple tune much more interesting (IMHO) :)

I'm going to be curmudgeonly, and stick with standard, through thick and thin, and i dont care if it is to the detriment of my fingers, and/or the tune....Mnyaaah....

I used to vow I would never ever leave standard, yet here I am!
Maybe it will just take the right tune to lure you, Pete.

By changing the tuning of my fiddle, it took me about 2 minutes to learn how to fiddle the tune, both parts. This way, you get the drones, too. As corporal Agarn said on F Troop "Makes sense; not to me but....." lol

OK here's my first wack at WAJTK. Did it in key of A, the way it seems to be done most of the time and with AEAE tuning. I pretty much parroted the the OTJ version for this time. I think the OTJ version may have flipped those A and B parts around which I kinda' like better. Also that high/low register thing seems to be a different in the OTJ version. Think It would have been harder to pull off in standard, at least for me. I want to try this tune in a lower key like maybe FCFC and see what happens.

Walk Along John to Kansas

Wow, Rich! Congrats on being first to get the tune going! Sounded good in AEAE. Good job fiddling that one.

NCNotes...yes, the way I tune to AEAE is to just tune the G string up a whole step and then listen for the perfect 5th of the next string...D...going on up to E. Then you will end up with a perfect 4th interval between the two sets of perfect 5th strings...i.e., 4th interval between the E and A...so it does give you a new dimension there so to speak.

Pete, I admire your curmudgeonliness...be bold...play that thing in standard! Lol...I'm sure it'll be fun.

Can't wait to hear what everybody does with it. I'll get mine up here in a few days...busy times so I'm runnin' behind...and fiddlin' behind too.

The tune Bob picked sounds like a challenge! Love the Bruce Molsky version , oh I wish one day hahaha.

He dances with fiddle.

But you'll play the Anja version like nobody else in the world can! And that'll be awesome.

Here's a recording I did with Dean Barber in Oct 2011 whilst in the middle of chemo and home for a short respite. (I was hiding my hairless head under a cap that read "I'd rather be fiddling.") Dean Barber came during this time by for some tunes and spirit-lifting.  Oh, FWIW, you can see my TUF bow hold. 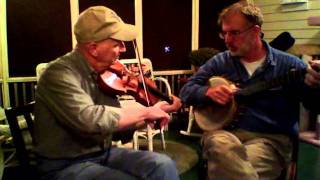 VIDEO: Walk Along John to Kansas
(click to view)

Nice duo. Where did you learn this tune, Kirk? To me its a very obscure one - I don't think I've ever heard anyone even mention it, let alone play it. We mostly play stuff from around here though.

And Kirk, I love the turns/variations the tune takes in your version...

Just found a Live version on soundcloud by one of my fav fiddlers Christine Cooper and her band "The prairie sharks" Nice..

https://soundcloud.com/christinecooper/walk-along-john-to-kansas-1  .....Just got to put up with some Advertisements(maybe) before it starts, but it's worth it.

Nice duo. Where did you learn this tune, Kirk? To me its a very obscure one - I don't think I've ever heard anyone even mention it, let alone play it. We mostly play stuff from around here though.

Thanks, Doug. I learned the tune from a number of sources, including field recordings from Clifftop and Genero festivals. I think I first heard the tune on a recording of Rafe Stefanini. I played regularly with David Allen and Richard Chance in the Dallas who also influenced me. Richard has since moved to W-S, NC.

Also, this tune is in the standard repertoire of the old time community in the DFW area.

Wow...some nice fiddling, Kirk! Y'all sound good together. Glad you shared it.

I guess you hear it in the Dallas Fort Worth (I'm guessin' that's DFW ) area because it's about walking to Kansas...lol???? Ain't gonna hear that one much maybe farther out from Kansas...like, farther than walking distance. I do like the tune quite a bit, even though I ain't nowhere near to Kansas. We could get a tune called Drive along, Groundhog, to Kansas, maybe.

'Any direction on a decent Violin Bow to order online?' 4 days