Okay, then - here's something cheer you up:

... if it doesn't give you a smirk, there's probably not much hope for ya:  https://www.youtube.com/watch?v=HBa1k3-g1to

This is in Newfoundland, by the way.

Cheer up for a gray winter day :-)

hmm I KNOW that tune.
Like, I found that I could play along...I have learned it somewhere, somehow...
My ears/fingers know it, but my brain forgot its name!

Usually known as Praties are Dug and the Frost is All Over, or some variation thereof.

That DID cheer me up. That boy seems to have a few things going for him. One, he obviously likes that style of music, two, he is not afraid to get up in front of a crowd, three, he is a good dancer and, FOUR, he seems to be handling his alcohol pretty well...I'd say.

LOL! Yeah, those big fellas can usually hold their liquor!  Congratulations, Lee - I'm sending that one off to me brudder - he spent some years in Newfoundland, and says this about a 'comment' posted below the video: 'Someone's comment was "Thats my papa..." I hope he wasn't referring to the kid, but on the Port au Port, I'm not too sure.'

LOL! Yeah, those big fellas can usually hold their liquor!  Congratulations, Lee - I'm sending that one off to me brudder - he spent some years in Newfoundland, and says this about a 'comment' posted below the video: 'Someone's comment was "Thats my papa..." I hope he wasn't referring to the kid, but on the Port au Port, I'm not too sure.'

It was interesting to me that the spoon player kept changing legs, like one was a snare and one was a tom.

I've watched this several times and I guess that's "Praties" all right, with a little hitch between parts.
Also, the young man's dancing has grown on me - he's responding to rhythms in the music pretty well I think.
Here's another great version of this tune, with some lyrics: m.youtube.com/watch?v=nbM3KtWQwsI

Thanks Old Scratch, yea, I learnt it as "The Frost is All Over" out of a fiddle tunebook I had! Mystery solved!
Interesting that it has a second name, too, I had not heard that one. Thanks!

In case this one is wearing off, here's another good 'un. 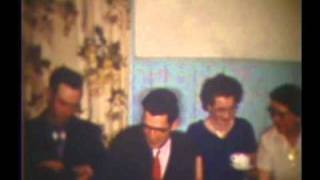 VIDEO: Saturday Night Up The Gatineau
(click to view)

Well, thanks for that! Always liked that recording; never saw "the video", though - what a treat!

That's "Mac Beattie and the Ottawa Valley Melodiers" - he always had a great fiddler; for many years it was Ward Allen, from south-western Ontario, who composed Maple Sugar. Then there was Reg Hill, from Nova Scotia. Don't know who it is on this recording.

Mac Beattie wrote lots of great songs, particularly the up-tempo ones, like this one. There are also a lot of songs set to waltzes; the lyrics of those tend to be formulaic - memories of love associated with some particular river or lake, that kind of thing. Canada being what it is, he is virtually unknown outside the Ottawa Valley.

Here's one with Reg Hill on fiddle, about a fiddler:  https://www.youtube.com/watch?v=y09UU4Rg64A&list=PLaYYgdalEO7AJikAzohlnwdVsJafqdqiB&index=15

And, no fiddle on this one, but it's one of my favourites:  https://www.youtube.com/watch?v=sb5kIqdXk8A

'Anybody going to the Grand Lake Fiddle Festival this year?' 19 hrs