There has been so much written about Tommy Jarrell that it would be very redundant (and impossible) for me to capture it all. I will give some highlights and include links for some further reading.

There is an anecdote related by Tommy about his proposal to his wife:

"Nina, we'll get married if you want to, but...I'll tell you right now, I make whiskey, I play poker, an' I go to dances, I make music...I don't know whether I'll ever quit that..." Nina's answer was, "Well, I believe we can get along all right."

In the 1960s, Alan Jabbour (who was a director of the Library of Congress' American Folklife Division) visited and recorded Tommy. He then began going to national folk music festivals and more people became aware of him and his playing. Brad Leftwich also documented Tommy's life and music in his book, Old-Time Fiddle, Round Peak Style: History, Tips & Techniques (published 2011).

Jarrell's elaborate and syncopated bowing style has been come to be referred to as the "Round Peak" style. Though many of the bowing patterns were not exclusive to Jarrell, they have become synonymous with him and his playing.

Information above has been gleaned from Wikipedia: https://en.wikipedia.org/wiki/Tommy_Jarrell
and an article by Ray Alden posted in Banjo, Fiddle, North Carolina, Old Time Music on March 24, 2015.

Here is a good article by my friend, Jim Peterson, which includes some photos and great videos of Mr. Jarrell playing: https://oldtime-central.com/tommy-jarrell-1901-1985-fiddler-banjo-player-from-surry-county-north-carolina/

Brad Leftwich states that Charlie Lowe and Ben Jarrell made the tune by revamping Pretty Little Girl. There is a lot of information at Traditional Tune Archive: https://tunearch.org/wiki/Annotation:John_Brown%27s_Dream

The recording of the audio of Jarrell at the end of this video is from Larry Warren's Slippery-Hill (www.Slippery-Hill.com)

Joining me is friend Amanda Harrison on fiddle.

Join my Patreon at: www.patreon.com/paulkirk 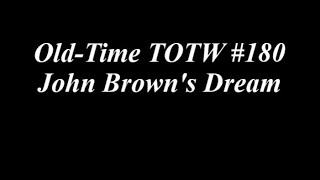 'Osage Orange for a fiddle or Banjo rim?' 12 hrs