I am stumped over this violin. It was given to me to identify. It has writing inside that is drawn in and not a paper label and reads, made by Dean Harrington. I was trying to identify a date that was too hard to read. There is a stamp on the back that I guess is a "D". I'm trying to figure out if it is home built. It is in very nice shape 1 piece back. Has a note written on back dated 1961. A bit confusing. 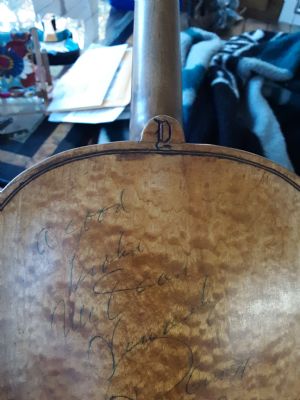 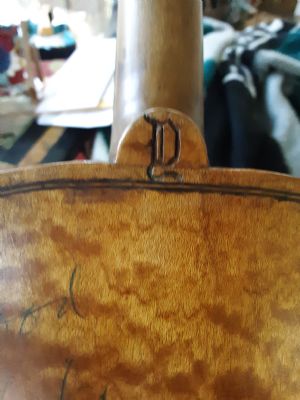 Photos would be helpful.

I finally figured out the picture situation. Check out the post.

It is definitely a violin made by an amateur maker. The button seems to have been either forgotten or sawed off when the outline of the back was cut, and a replacement piece was glued on.

I agree that the maker picked a very nice looking piece of wood for the back.

What does it say there in the back? That looks like an autograph.

Inscriptions on backs used to be an occasional occurrence. Often, fans of players would take their fiddles to performances and ask to have them autographed. Iâve seen one or two that Heifetz signed while on tour.

It could be that the owner of that violin took it along to a concert and asked a player to try it out afterward, and the player wrote a little note along with his autograph.

Exactly what I was assuming. I'm just curious as to what it says since we can't quite make it out. Seems very legible, just some glares and only part of it is shown.

As far as the violin being signed, this is probably correct. As you get to the bottom of what was written on the back, it was very hard to make out because it gets duller towards the end of the message. It said very nice violin on part of it. I had a feeling that it was probably built by an amateur. A lady that buys and sells storage lockers gave it to me to see if it was worth anything since she knew that I work on violins. It is missing everything although the body seemed to be constructed quite we. At this point I may offer her $25 for it but nothing more. It may be a good spare violin project.

'You Are My Sunshine' 1 day

'You Are My Sunshine' 1 day

'The Timber Within' 2 days

'The person responsible for my interest in playing music' 2 days

'What do you do when you are not fiddling or here on the Hangout..' 2 days