Price is not a fiddler who is well known today, though he contributed many fine and unusual tunes to Marion Thede's The Fiddle Book, some of which appear to be unique. We have featured many of Mr. Price's tunes in the Old-Time TOTW series. For other tunes from J.S. Price, see episodes #36: Tulsey Waltz; #68: Tom and Jerry; #73: Custer's Last Charge; #107: Old Paint; #108: Haning's Farewell; and #119: Went to the River and Couldn't Get Across. Thede noted more details about Price than many of the other fiddlers she featured:

"Mr. Price's violin is a fine old instrument with an Italian coat of arms carved in relief on the back. He makes a wonderful picture, with his white hair, the old violin held in the right hand, and the left bowing arm high in the air when playing on the E string."

"Around 1898 Tom Slayton was a saloon man in Mangum, passing out whiskey straights and sidecars at his place of business on the southwest corner of the square. One Saturday night that fall Slayton was playing for a dance four or five miles northeast of Mangum...Some time after the dance was in full swing Slayton played the strains of an unfamiliar waltz. When pressed for information he admitted that the melody was his own. Other fiddlers learned it, and Slayton's Waltz became a popular dance number."

The only man by this name that I could find in Mangum, Greer County, OK, was Thomas Neal Slaten (25 March 1853--9 July 1926). He was born in White Co., GA, to Samuel H. Slaton (1828-1857) and Martha Vonner (1813-1855). He settled in Mangum in 1887. He had humble beginnings as a cowboy and moving onto a general trader who ended up dealing in real estate. He obviously did quite well because he owned a lot of rental property in Mangum and built a brick opera house in the city. I found his probate papers and discovered that his estate was valued at $60K in 1926. That is equivalent to approximately $893K in today's money. (source for above: public documents and obituary). I did not find any record of this Thomas Neal Slayton having been a saloon keeper, but that might have been a short-lived venture among his many endeavors. The surname Slaten has many alternate spellings including Slatten, Slaton, Slayton, Sladden. Indeed, Thede herself gives two spellings in The Fiddle Book. In her text, she refers to him as "Tom Slayton," but she titled the waltz "Slaton Waltz." Also note that his father spelled the surname "Slaton."

Thede notes that Slaton Waltz was one of many melodies named for Oklahoma fiddlers who composed them and which were known only locally. There is no indication as to when Mr. Slaton wrote the walz, but it was obviously around 1898 or before.

Slaton Waltz might have been popular locally, but it certainly appears that it never spread much further than the area in which the tune was born. As far as I know, this is the only recording that exists of the tune. I added the fiddle harmony part. I played the melody an octave lower for the third fiddle part.

Joining me is friend Jeanie Creamer on guitar and bass (Hocking Hills, OH). Jeanie is an awesome performer and singer-songwriter. Check out Jeanie's band Jeanie and the Dreamers at https://www.facebook.com/jeanieandthe...

I'd like to thank my newest Patreon member, Cheryl J.

Old-Time TOTW is able to continue through your support. If you'd like to be a part of this journey, join my Patreon at: http://www.patreon.com/paulkirk

I offer excellent perks for my Patrons. 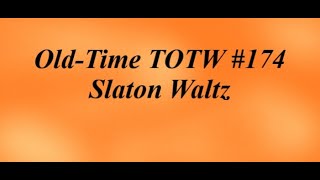 'Where do the extra parts in Grey Eagle belong in relation to the old tune?' 20 hrs

'Tuning for The Cuckoo?' 2 days