The Collins family was well known for many generations of fine fiddlers and excellent musicians. Max's uncles, father, and siblings played instruments and sang. His father also composed tunes. Many years later, Earl Collins mused that the Collins family could have been like the Carter Family since there were four girls and five boys who were musicians, and the girls could have played "anything they would have tried."


Max was born in West Plains, Missouri. The family moved to Wynnewood, Oklahoma, in 1917 where they share cropped. Soon after they moved to Shawnee, Oklahoma. Max's older brother Earl played fiddle for square dances to bring in some income during the Great Depression. He taught his six-year-old brother Max to play the guitar and always considered him "his guitar man." Max's obituary states that he was a "self-employed musician who, through the years, had his own bands and played for many others."


Though Marion Thede included many tunes from Max Collins in The Fiddle Book, she did not include any biographical information about him. She also did not include any biographical information about the tune she notated from Max Collins' playing titled "The Lost Indian." The tune is in calico (AEAc#) tuning, but can be played in lower tunings with the fiddle strings tuned to the same intervals. There are many different tunes that go by the title "Lost Indian." Some have more elements in common than others, and most are in calico tuning. Of the tune, Traditional Tune Archive says:


"Guthrie Meade and Mark Wilson (1976) point out that, among older traditional fiddlers, 'Lost Indian' is a generic title for a number of tunes related not so much by melodic content as by the fact that they are characteristically played in scordatura (AEac#) tuning. Charles Wolfe, reiterating Wilson and Meade's line of thinking, confirms that the 'Lost Indian' tunes are a family of fiddle tunes popular from Virginia to Texas, 'more associated with tuning AEac# than with melodic contours."

The version played by Max Collins is then directly addressed:

"...a tune with this title appears in a list of traditional Ozark Mountain fiddle tunes compiled by musicologist/folklorist Vance Randolph, published in 1954, and is perhaps related to the version Marion Thede collected from Oklahoma fiddler Max Collins. 'Lost Indian' was also the repertoire of fiddler Louis Propps (Texas, 1936)."


See Old-Time TOTW #127 (published on 11/29/20) for another version of Lost Indian from the playing of Eck Robertson: https://youtu.be/XxeLNMl9kss


Old-Time TOTW is able to continue through your support. If you'd like to be a part of this journey, join my Patreon at: http://www.patreon.com/paulkirk
I offer excellent perks for my Patrons.

I also give remote private lessons. 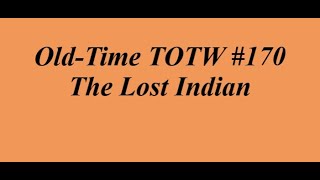 Thank you, Peggy! I hope the fall is treating you well :)