From the Blue Ridge Music Hall of Fame (wilkesheritagemuseum.com/hall-...bert-hash):

"Born in 1917 in Rugby Virginia, Albert Hash was a well-known and beloved fiddler and instrument maker. He learned to play fiddle from Corbit Stamper, Jim Reedy, his uncle George Finley, and was influenced by G.B. Grayson. After Grayson was killed, Albert played with Henry Whitter. Albert also played with many other musicians through the years, including the Virginia Carolina Boys with Wayne and Max Henderson, and of course the Whitetop Mountain Band with Flurry Dowe, Emily and Thornton Spencer, and Tom and Becky Barr.

Albert Hash made his first fiddle at age ten, at the height of the Depression. He enrolled in the U.S. Navy and learned to be a machinist, something that would be an integral part of his later fiddle making. He worked in the naval shipyard and torpedo facility in northern Virginia. While in the Navy, he married Ethel Ruth Spencer in 1944, and the two of them had two daughters: Joyce Mae and Audrey Marie. After being in the Navy, he moved to back to Fees Branch area and then to neighboring Lansing, NC.

During the folklife revival of the 1960s and 70s, many musicians sought his expertise, seeking history, an impromptu jam session, one of his handcrafted instruments or instructions on how to craft an instrument. In 1967, Hash and his wife moved back to Whitetop, Virginia. He continued to visit local craft fairs, music festivals and fiddler's conventions in Virginia and northwestern North Carolina and was a regular at the Blue Ridge Folklife Festival in Virginia and the Ashe County Fiddlersâ Convention. His talents have been the showcase for the 1982 World's Fair, the Smithsonian Institute and the Grayson Highlands State Park in Mouth of Wilson, Virginia.

After his death in 1983, the Commonwealth of Virginia presented Ethel with a framed copy of House Resolution 18, proclaiming a moment of silence in his honor. Albert also helped start the old time music program at Mt. Rogers Combined School in Whitetop, VA. Albert, his daughter Audrey, Thornton Spencer and Emily Spencer started volunteering at the local fire department teaching old time music lessons to the community. Later, he began giving lessons at Mt. Rogers School to the students there. After he passed away, Audrey carried on the music program until she moved to Lansing, NC. Emily Spencer now carries on the old time music program and it has become an everyday class that students get credit. It also has been featured on television, newspapers, radio and got nominated for a Grammy for schools. The school band is named the Albert Hash Memorial String Band."

Traditional Tune Archive states that the origins of the tune are somewhat obscure, but that Hash said it was originally a British Isles tune. Susan Songer and Clyde Curley (1997) report that New York fiddler Judy Hyman (of the Horseflies) believes it originally derived from the QuÃ©becois tune "Reel du Pendu" (Hanged Man's Reel) and that it was rendered in a Southern old-time style by younger upstate New York fiddlers. According to Hash's nephew, Albert learned "Hangman's Reel" from a 1968 recording of Northcutt. It is a very popular "festival tune" among younger old-time fiddlers and frequently heard at square dances. TTA notes that the tune Rattlesnake has a related melody. 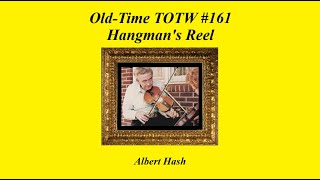 'Should mandolin player get a fiddle and dabble and if so what quality?' 13 hrs