Hi folks. Does anyone happen to have one of the old Fender electric violins that they would part with? They did an original batch in the late 50's and then used up the pickups on another run in the early 70's. The general consensus seems to be that they sounded great, but were rather heavy. I've been tinkering with some lightweight prototype pickups of a humbucking version of that original pickup, but I've never actually played the original so I'd like to find one to be able to do some comparative tests and get some measurements. I'm not overly concerned about the condition of the instrument as long as the pickup still works. I'd be willing to buy outright or trade (violins, guitars, gear, etc.). 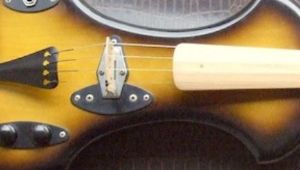 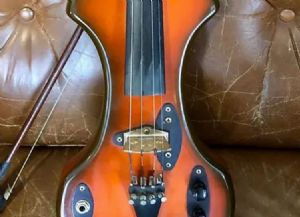 Weren't the original pickups just piezo pickups? How can you make a humbucker out of a piezo?

No actually. That's what's so interesting about Leo's original design. The bridge sits on a metal platform with an inductive plate below that and a single coil on the side. So it's a single coil electromagnetic pickup. I'm working on a couple versions using neodymium and humbucking coils which I'm hopeful will come close in terms of tone in a substantially lighter/smaller footprint, but I'd love to get ahold of one of the originals to make some measurements from and do some comparisons.

Interesting. I see they did go to piezo later, and still didn't sell many. Probably too much mass in the bridge/ pickup system? Are you familiar with efforts to develop various mag pickup systems for violins in the past 50 years? Some very ingenious.

yeah, there have been a few cool magnetic designs, but most have some basic limitations due to the movement pattern of the strings. There's a guy in the Ukraine who has a nice system that puts posts between the pairs of strings at the end of the fingerboard. It seems to have the most balanced tone from any of the other varieties that I've seen. I think pairing that with a bridge platform might give the best of all options. Although, for what it's worth, piezo's can sound very good when implemented correctly. It's kinda shocking how many acoustic instruments ship with piezo based systems that aren't properly designed/installed/processed. It seems that people tend to view it as a one-size-fits-all tech which really isn't the case.

I really should stay out of this, since I don't know much about it, but that doesn't usually stop people these days.
I've always thought of Leo Fender as a magnetic kind of guy, so would have been surprised if the violins had used piezo pickups (I have a short scale Fender student bass that supposedly used repurposed Strat single coils). Also, I don't think piezo elements were much used for instruments until the early '70's. A close friend of mine developed the system for Ovation, which, along with Takamine, was one of the first commercially available, and held the patent. It was a complete system though, including the preamp, which I think is one of the problems today where these things are sold just as bare pickups.
I wonder what the Lloyd Loar "Vivi Tone" violin sounded like. Anybody ever heard one?

From what little I can tell, the vivi tone is similar in principle to what Leo did. I've never heard any clips though. There was an early Rickenbaker (spelling?) electric violin as well.

Did you have any luck finding an old Fender?
Iâve seen just a couple of NOS pickups on eBay but not for a few years. The 70s âCBSâ Fender violin is fitted with the original 50s technology. Theyâre a lot easier to find than a 50s instrument but still very few were ever made, certainly less than 200.
Leo Fenderâs idea is certainly a much better solution to electrifying a violin than most that followed. Personally, I havenât found an instrument I prefer playing.

Thanks Ben! I was bidding on that one last week and they cancelled it. Hopefully it continues to close this time!

'Becoming a musician - looking back over 15 years' 1 day