Old Time TOTW #155 is Johnson Boys from the playing of the Grant Brothers AKA the Tenneva Ramblers. The band formed in 1924 and was composed of Claude Grant (1906-1975) on guitar and vocals, Jack Grant, Claude's brother (1903-1968) on mandolin, and Jack Pierce (1908-1950) on fiddle. The Grants were from Bristol, TN, and Pierce was from Smyth Co., VA. The band was sometimes joined by Smokey Davis, a blackface comedian, and Claude Slagle on banjo.

Jimmie Rodgers offered them work as his backing group in 1927. They changed their name to the Jimmie Rodgers Entertainers and made some appearances with him. They were scheduled to back Rodgers on his first recordings but they backed out and reverted to their old name to pursue a recording career on their own. Their recordings were on Victor records. They played on various radio stations until 1954, sometimes going by the Grant Brothers. Their entire recording output was issued by Puritan Records in 1972. They recorded at both the Bristol Sessions and Johnson City Sessions. (above information from AllMusic)

âThe Johnson City Sessions were one of several significant location recording sessions conducted by commercial recording companies in Appalachia during the 1920s and 1930s. But the Johnson City recordings were unique. More than those from the other rival sessions of that era, they documented the broad sweep of the Appalachian song and tune repertoire, from the traditional to the contemporary, from the familiar to the obscure, and from the serious to the silly. While some of the recordings made in Johnson City during 1928 and 1929 were in the country music mainstream, other recordings stood out as truly unusual, even avantgarde, anticipating future directions for as-yet-unborn music genres such as bluegrass, revivalistic folk, rock ânâ roll, and Americana.â

"Paul Clayton identifies this as an old courting song, comic in nature. Some see similarity with the Gows' tune 'Welcome Whisky Back Again,' and the Irish 'Finnegan's Wake.' Gus Meade found Johnson Boys an adaptation of [the Irish song] 'Doran's Ass,' dating from around 1860... Warner (1984) says, 'This is a dance tune for the fiddle and banjo - one of the oldest in the mountains. The words are incidental.' Despite Warner's assertion, versions of Johnson Boys prior to the 20th century have not been found (despite mention of the Civil War in verses to some variants, including the New Lost City Rambler's version). The title appears in a list of traditional Ozark Mountain fiddle tunes compiled by musicologist/folklorist Vance Randolph, published in 1954."


The recording for this video was done in the summer of 2020 with Stephen Rapp on banjo and Sean Fen on guitar.

I have some openings for Old-Time fiddle students. Contact me at FiddlerPaul71@gmail.com. 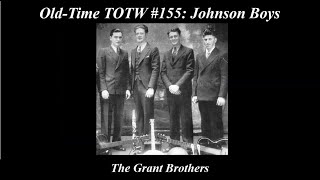 'Picking a fiddle tradition - What would you do???' 1 day