Thanks for letting me join.

I have been doing research on Charlie Justice who played fiddle for George Jones back in the 60s. I have reached out to many folks including Sonny Curtis, but just can get a response from anyone.

I have a picture of me, as a child, with a guy playing fiddle in a Ft Worth honky tonk, back in 1968 or 69. My folks always told me it was George Jones' fiddle player, but they couldn't remember his name. I started looking and found that at that time the fiddle player was Charlie. I would love to find someone that knew Charlie and could tell me if this is in fact Charlie in the photograph, with me.

Thanks in advance for any help. 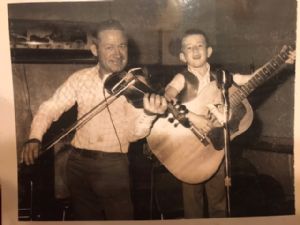 I don't know if you can tell from this photo, but I found this album cover where he's behind George Jones: bb.steelguitarforum.com/viewto...6dc930196

I don't care who it is: that's a great photo!

Looks to be the same person to me.

I don't know if you can tell from this photo, but I found this album cover where he's behind George Jones: bb.steelguitarforum.com/viewto...6dc930196

Yup, I have seen this pic and I'm just not 100%.  I have spoke to someone from "Fiddler Magazine" and she believed the pics look alike and said she would check around her office with others, but I have not heard back from her.

I don't care who it is: that's a great photo!

Thanks for the kind words.  My Mom passed away last year.  I decided to pick up the fiddle, a few months ago and I was going through the pics I got from Mom's house and found this one.  I put the pic in my case for motivation, but it sure would be nice to know if it is really him.

Thanks for the comments.

The mystery has been solved. I had been reaching out (pestering) Sonny Curtis. Apparently, I was pestering the wrong Sonny Curtis. He directed me to the correct Sonny who passed away several years ago. The website was still active and I emailed them. I got a simple and bitter-sweet reply, "This is not Charlie Justice."

So, at least I know it is not Charlie. I would like to know who it is and why my parents believed he played fiddle for George Jones, but since they are both gone I don't think it will ever be solved.

It doesn't appear to be the same person to me. I tried looking at the facial features first, but the hairline was the deciding factor.
Anyhow, I do think that is a great picture!

Well that's sort of deflating. I hope you can figure out who it was. Could it be that G. Jones had players here and there that went on the road but just didn't get onto the gravy train, so to speak?

'Should mandolin player get a fiddle and dabble and if so what quality?' 3 days