I will use Wilson Douglas' words to describe French Carpeter (which is a wonderful tribute) from âHow I Became a Fiddler." This is in liner notes to the CD "Wilson Douglas: The Right Hand Fork of Rushâs Creek:"

"French Carpenter was an interesting man. Had been a bugler in the World War. He was not a large man at all. And I guess he could have put on a flour bag and itâd look good on him. Had been a handsome man. Fair complected, hair combed straight back. And big blue eyes. Fair every way. And he was a man you couldnât hear him walk on nothing. And this donât make no sense: he was a feller could walk in the mud, but yet he wouldnât get his shoes dirty! and walk across the floor, it was like cats! And dance. Lord have mercy! that man could dance!

And right after the war and when I got discharged, why, after I found out Ed Haley was dead, well Carpenter came back in the country and in 1958 he retired â lived in a little old house over here right where Rush Fork and Otter meet, house is still there. And heâd take that fiddle out about dark, you know, and all them frogs hollering â you know in the spring of the year. â I thought that was the lonesomest dang thing I ever heard.

So I practically stayed with him. Oh, I was with him off and on for eight or nine years. And weâd get together from one to three times a week to play the fiddle. And he had a first cousin was a hot banjo player. And weâd play all night! Play the god-blessed night! And heâd make me tune my fiddle with him. And heâd say, 'Now,Wilson, donât you try to copy me, for you canât. Thatâs ruined a many good fiddler. We have a different time. If you happen to be something like me, fine. Play yourself. So we got to be so doggone good it just sounded like one fiddle, you know. Iâd miss a note, heâd stop, heâd say, âNow, play that over again, you missed it, Wilson.' Heâd make me get it â wouldnât let me see no peace till I did â he was that way.

And Carpenter and meâd play, and Carpenter had his time, you couldnât push him, he had a certain time. And if he got with a musician didnât suit him, heâd say, 'Well, I donât feel good, Iâm going to quit for tonight.' You know? He wouldnât offend nobody, he was very kind.

Oh, I worked every day. And Iâd go up there, I was all out of steam! Iâd work six days a week and I was always up to one or two oâclock in the morning with that fiddle. Well, Iâd come home and Iâd go to bed and that fiddle tune would keep pushing me; I couldnât sleep, I could just almost put my finger on it. And Iâve got up at four oâclock in the morning and played that tune. And after I got it, Iâd go to bed. Carpenter drove me all the time and he kept telling me he had a bad heart condition and he said, 'I want to push you all I can.' And the man died in 1964 and had a couple of tunes I never got to learn. He was a wonderful old time musician."

"John Hartford notes that the area around Stinson Creek in Calhoun County, West Virginia, was at one time a very rough place and best avoided...Gerry Milnes reports that source Douglas associated the tune at the Mouth of Stinson Creek in Clay County, and recalled that there was a picnic attended by the 'woodhicks' (lumberjacks who were then harvesting timber in the area) there during which part of the entertainment was a wrestling match. Something went amiss and one of the participants, a man named Cheneth, was severely injured and died the next day. This 'crooked' tune is supposed to reflect the sadness of the event. According to Douglas there was an old tavern called Copperhead Junction (also known as âBloody Bucketâ) at the Mouth of Stinson that had a reputation as being one of the roughest places in the region, notorious for excessive drinking, fighting and shootings."

Pretty jaunty tune for something meant to reflet sadness!

I wish to thank friends Stephen Rapp on banjo (Kent, OH) and Sean Fen on guitar (Wooster, OH) for recording this tune with me in early July 2020. 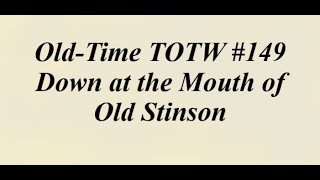 This makes me happy!

Hey, Peggy, thanks! Hope you are doing well.

Thank you, Anja, it makes me happy to know that this makes you happy :) It's such a fun tune

Thanks, Guy! I related your message to him :)

'Video Surgeon: Jumpstart Your Fiddle Playing. Use What the Pro's Use!' 4 days