"In the previous generation of the [Gray] family were five brothers: Charley (Mrs. Armstrong's father), Laney, Dan, Joss (Joshua) and Abe, all skillful on some instrument, and accustomed to playing together for dances...All of these men are now gone, and Mrs. Armstrong, who began playing at the age of five, is the sole legatee of their melodic treasure. As a young girl she used to listen by the hour to her uncle Laney â the most expert fiddler of the group, and the one possessing the largest repertory of tunes â absorbing his music and learning to play it herself. She also use to play cello, on which she would help the group out when they were playing in the pavllion at âKistâs Groveâ (a dancing ground on the outskirts of Derry), and elsewhere in the neighborhood.â

"About thirty-five years ago, [1908/1909 ] her {Sarah's] uncle Laney went to live in the Far West. The âGray Boysâ ensemble broke up, although its remaining members continued to play individually for dances; and Mrs. Armstrong, with the assistance of her daughter at the piano and her son on the guitar or banjo, has likewise continued playing the old music, either for dances or an occasional radio or theater program. The children, however, do not pick up her repertory, and she is left its only preserver."

Though Sarah's son and daughter accompanied her (on guitar and piano, respectively), neither of them continued her tradition of passing on the family's tunes.

Sarah Armstrong played Rolling Off a Log for Samuel Bayard on 5 November 1943. Of the tune, he says:

"Every fiddler knows tunes of the character of [Rolling Off a Log]; they are good samples of the sort of tunes in our tradition which sound like imported British melodies, yet are difficlult or impossible to trace to British sources...The third strain...is really an imperfectly-remembered alternate ending formula for the second part, and, as it stands here, is fragmentary."

Be that as it may, I view the last four bars of the tune being like a tag that takes use nicely back to the beginning of thte tune. I also find it harmonically interesting, as the A part begins on a I chord; the B part, a V chord, and the "C" part (or tag, or "fragment) on a IV chord. I think it gives the tune a nice flow. The whole tune, however, does appear to be based on the Green Cockade (not related to the Irish jig of the same name). It may be that Sarah was trying to recall that tune, or perhaps this is how she was accustomed to playing it.

Joining me is friend Sean Fen (Wooster, OH) on guitar.

I'd like to thank my latest Patrons, Kerry Laird and Denise Warren!

Old-Time TOTW will be featuring a tribute to Vesta Johnson who passed away on 3/5/21. 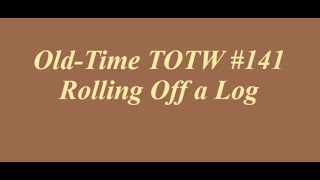