The only information I have about the fiddler Wallace Thompson is that Bruce Green recorded him in 1974 and 1988. A recording of him playing Moonlight can be found at the Digital Library of Appalachia (dla.acaweb.org/digital/collect...a/id/1894). Before playing the tune he stated:

"This is an old tune. It's an old Scottish tune...I've heard some of the real old fiddlers play it, my daddy played it, Gusty Wallace, perhaps Shelly Lyle, my great grandmother used to hum it to me and sing some words to it, and I don't remember what they were now but it was an old tune then and she was old."

Bruce Greene collected the tune, and though Thompson played it in an open, cross tuning, there are recordings of Greene playing it in D. It has a very different feel to me in D, but is very nice, too. In one recording of Thompson playing the tune, he is tuned to AEAE, at approximately A415, but a bit sharp. On another recording, he is tuned AEAE, but closer to A440.

The title is said to refer to dances in the area that lasted all night and were referred to as "moonlights."

The photo at the end of the video is Gusty Wallace, but the recording is Wallace Thompson playing Moonlight.

I'd like to thank my latest Patrons, Kerry Laird and Denise Warren!

Old-Time TOTW will be featuring women fiddlers and musicians in March for Women's History Month, so be sure to Stay Tuned! ?? 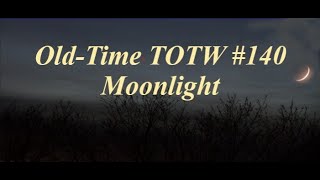