John Martin Lusk has no gravestone, there is only a marker where he is buried. His year of birth is incorrectly stated as 1886. Documents from his lifetime confirm that he was born in 1889.

Linda L. Henry traced John Lusk, Murphy "Murph" Gribble, and Albert York back to white slaveowners, William Lusk, Thomas Gribble, and Uriah York, who lived on neighboring farms in Warren County, TN. Jeff Lusk was born into slavery c.1820 on the farm of William Lusk and was sent to New Orleans to learn fiddle. Joe âLewisâ Lusk and Mary Mollie Lusk were two of Jeffâs seven known children. âLewisâ was the father of next generation musicians John Lusk and Albert York. Mary Mollie Lusk was the mother of their musical partner, Murphy Gribble. John (fiddle), Murphy (banjo), and York (guitar) formed the group now known as Gribble, Lusk, and York. They busked every Saturday for nearly thirty years on the same street corner in downtown McMinnville.

Field recordings were made of them in 1946 and 1949 by Stu Jamieson and Margot Mayo, and Ralph Rinzler recorded Lusk in 1964, accompanied by Lusk's son on guitar. Distinction iwas made between the different types of music they played. The first was their public music which they played on the street corner to entertain white audiences. The group kept separate âthat old stuff,â âthe way the old folks played,â and the tunes known as âsukey jumps.â These tunes were played for âblack occasions such as kitchen dances, weddings, etc..â This kind of music was hidden from âwhiteâ ears. The first recordings made of the group were of the public music they played. Later, some of "that old stuff" was recorded, some of which Lusk attributed to Will Gribble, Murphy's father. In 1989, seven of their tunes were released commercially by Rounder Records on an LP titled "Altamont, Black Stringband Music from the Library of Congress." An account of the recording sessions appeared in The Old-Time Herald, Summer 1990, pp. 27-31.

The information above comes from Linda L. Henry's detailed essay "'Some Real American Music' John Lusk and His Rural Black String Band." In it she looks at how three generations of African American musicians and their music survived slavery, the failure of Reconstruction, and the Jim Crow South. She discusses the distinct qualities of their music and things to be learned from their music and their stories. This essay, along with another titled "The Saturday Fish Fry and Square Dance in Dogtown" and many recordings can be found at gribbleluskandyork.org.

Joining me is friend Stephen Rapp on banjo (Kent, OH)

Old-Time TOTW is able to continue through your support. If you'd like to be a part of this journey, join my Patreon at: patreon.com/paulkirk I offer excellent benefits for my Patrons. 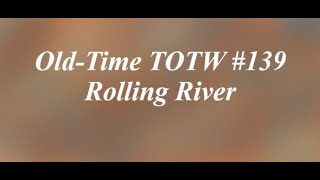 'Tuning for The Cuckoo?' 1 day