While playing my fiddle today, the tip of my bow suddenly broke off. It looked like someone had taken a knife and sheared off the tip. I never overtighten my bow and have never banged it against any other objects before, so I am baffled how this could happen.

Has this happened to anyone?  Do you think it can be repaired? It is good quality pernambuco bow made by C. Ortega, purchased about 6 years ago. 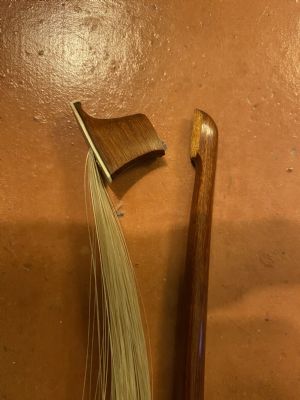 Likely the tip being bumped either while being played or the bow was dropped onto the tip. This could have happened at some point and cracked the bow slightly and over time with use the crack spread. Try Carbon Fiber......it is much hardier and still makes a lively bow. I feel like I should say " Sorry for your loss". That's a clean break on the tip. You may be able to glue it successfully... just
maybe..

Yes it can be repaired.

I'll defer to the resident luthiers, but if it was me, I would not hesitate to attempt a repair on my own with some Gorilla Wood Glue...with that clean break, I'd bet the repaired joint would be stronger than the wood...

Yes, there is a repair, although it may or may not be possible in this case. The repair is called a spline, and it’s done by gluing the head back together (NOT with Gorilla Glue!), then very carefully cutting a channel right down the middle of the head with a circular saw blade while the bow is chucked into a lathe. After the channel is cut, a new piece of pernambuco is fitted that matches the channel. That is glued in place, then trimmed down.

It can be a solid repair if done properly. Unfortunately, there is no guarantee that the bow will perform the same way after the repair. It’s a major structural repair and there’s a chance that the flexibility of the stick right behind the head will change.

Splined bows are not at all uncommon—I work on them frequently. The downside is that, like a soundpost crack, a broken head reduces the value of a bow exponentially.

On the other hand, I know of an orchestral player who has a Tourte that broke at the head. He took the Tourte in to see if it could be splined. It could, and the result was excellent. He used the money paid out by his insurance policy for the break to purchase another bow of similar value, which he put away as an investment. Then he went back to playing the splined Tourte in the orchestra. Sometimes it all works out.

Sorry to see that. I'm not a luthier, but yes it can be repaired, and no, gluing it yourself with Gorilla glue is not the way. Times may have changed, but this used to be a pretty delicate repair, and therefore expensive. Also, a bow with a repaired tip loses a great deal of its value.
That said, I've played with an older German bow with a repaired tip for over 20 years, and its still fine. You wouldn't notice the repair unless I pointed it out. I wouldn't have been able to afford it if it hadn't been repaired - it plays like a more expensive bow.
I think if you Google "violin bow tip repair" you can see how its done.
Edit - I see Rich answered before me. He covered it pretty well, AFAIK.

I believe i would peg it. But i wouldn't run the peg square but consider the loading situation. This is an online forum. Opinions are free. This is just mine.

Thank you all for your responses. I didn't know that it could be repaired. I was prepared to buy a new bow. I will take it to my local violin shop to see if they can repair it.

Just be advised that it may cost more to repair the bow then its value after repair.

I have a bow which had the repair that the luthiers described above (spline method). However, it broke, some years later due to my neglect, and I tried repairing it with a number of different glues, non of which worked, until I went to the one that I trusted the most but probably cannot be undone, the original J-B Weld (caution: has be the original not the one for wood; it didn't work). What happened with the glues that didn't work all failed the first time I tightened the hair.

It's been many years and to bow still works, I don't use it very often as people who professional rehair bows refuse to do it. Someday, I'll have to try and rehair it myself.

I want to give an update on my broken bow issue. I spoke to my local violin shop. They couldn't do the repair themselves and would have to send it to a specialist in NY. The cost of the repair would be $500 - $700! The bow only cost me about $400.

Looks like I will be getting a new bow for Christmas.

Glad to hear that your getting a new Bow. Don't toss the broken one, someone will want to buy it.

I want to give an update on my broken bow issue. I spoke to my local violin shop. They couldn't do the repair themselves and would have to send it to a specialist in NY. The cost of the repair would be $500 - $700! The bow only cost me about $400.

Looks like I will be getting a new bow for Christmas.

The estimate for the work is reasonable, especially if the bow is going to Isaac Salchow. His shop does incredible restorations on some of the world's finest bows.

It's good to know your options. I agree that in this case, your most economical option is to buy a new bow.

Southwest Strings has a 25$ off coupon for today Cyber Monday, if you are looking for another bow to augment what you have. 25CM2020 is the code for the discount.

I wouldn't give up on your bow quite yet. Many shops are not equipped to do this repair, but I would think there is someone in you area, or in the Bay area who can do it. You really should be looking for a bowmaker (aka "archetier") or a shop with one on staff.
Also, a $400 bow probably doesn't need the attention of an absolute master of this craft. Here's a blog from a shop in Raleigh, NC that shows how this repair is done: trianglestrings.com/headspline/ You could contact them and ask what they charge for this work.
Here's a bowmaker who seems well qualified, and her price is much less than what your local shop quoted:
shop.lahbows.com/pages/bows-re...ir-rehair
And another shop in the same price range: lashofviolins.com/repairs.htm
So it might be possible to have your bow repaired for less than the cost of a comparable new one. Keep in mind though, that your $400 bow will then be worth more like $100 - 150, but you'll still have it.

Rob: Thanks for the tip but I will be shopping at my local mom & pop violin shop.

Doug: Thanks for the references. I see that the shop in Maine only charges $250 for the spline repair. But I have decided to try a Coda carbon fiber bow (thanks Richard) so that I won't have to worry about future breakage. Plus there is no guaranttee that the spline repair will be permanent.

This has been a lively and informative discussion. I want to thank all of you for your great advice and insight.

Sorry I haven't been around the forum much, but my colleague does that sort of repair commonly for around $200, providing the break is clean. She's competent, and I would trust her with my own expensive bows. She's got the right setup and experience. It doesn't take a great deal of skill; mostly the right setup adhesive, materials and experience. I just never bothered to build the right rig, when she's had one over at K C Strings since 2006 or so.

Too bad it's a good bow.
I had that happen to my cheap starter kit bow and epoxied it and put a small screw through it.
Seems to work fine, but don't let anyone look at it!

'Fiddle Lesson - How do you play faster while still sounding good?' 2 days

'The Hills of Kaitoke' 3 days