John Salyer was heavily influenced by his close neighbor, and later musical partner, Willie Fletcher (b. 1871). He learned many of his tunes from Fletcher and said him to be "the sweetest and smoothest fiddler I ever heard." His son Grover recalled "He [John Salyer] played for a lot of dances...I've seen him...playing for a hoedown dance and he'd jump up and dance and play the fiddle at the same time." Another fiddler friend of John's was William Hamilton Stepp (1875-1957). Several tunes that Stepp and Salyer played in common are remarkably similar, and it's very possible that they learned some tunes from each other. Salyer's son Glen said of Stepp, "I liked to hear him play. He was considered a good fiddler, and he was. He loved to entertain people...more than Dad did." There were fiddle contests now and then in the Magoffin area, but Salyer rarely participated in them. (source: routyrock, Ancestry.com, posted 6 October, 2009)

Though Salyer's tunes are popular and played by many fiddlers, this doesn't seem to be the case with Little Bobby. Traditional Tune Archive states Little Bobby is a member of the "Boatsman family" of tunes and notates the tune in the key of G, but it is actually in D. There is a version of Ida Red that I've heard Rayna Gellert play, and the A part of that is pretty much the B part of Little Bobby.

Next Sunday, 11/29, I will post a free lesson video to accompany next week's Old-Time TOTW. This will be in conjunction with an article about me and Old-Time TOTW for iFiddle Magazine that will be published on December 5, 2020.

You can join my Patreon at: patreon.com/paulkirk Your membership and support helps me continue to bring you Old-Time TOTW. 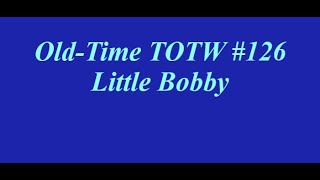 Another good one, Paul. Y'all sound great. Thanks.

Thank you, Peggy. Probably one of Salyer's lesser known tunes.

Hope you and yours have a good Thanksgiving!

Thanks, Paul. Happy Thanksgiving to you and yours as well.

'Did I do a good job of tabbing this fiddle tune?' 4 days

'Them was the last two biscuits' 5 days