This week's tune is Wag'ner One Step from the playing of "Old Man Langford" of Harmon County, OK, and is found in Marion Thede's The Fiddle Book. Needless to say, with the name Thede left us, I wasn't able to narrow down who the mystery fiddler who played Wag'ner One Step is. There were several men with the surname Langford in the vicinity who could have been considered an old man during the time frame in which Thede collected tunes. I even looked through city directories, Census reports, and other documents to find some sort of connection, but I was unable to find any.

Related to "Wagoner (1)." The musical motif of the first several measures of the first strain is shared with several tunes in 'C' major in American 'old-time' tradition, including "Lets go Boys the Party's over," "Battle of Droop Mountain," "Fun's All Over (1) (The)," and "Devil on a Stump."


Thede notated the tune in 2/4 time and gives a somewhat moderate metronome marking of quarter note equals 104bpm. Thede includes many metronome markings and tempo indications in her book. They are, presumably, the pace at which the fiddlers played the tunes as she took them down. I feel it is important to state that these are approximations or indications of the character of the tunes rather than absolute markings that should be adhered to dogmatically. As with any source material--be it written or recorded matter--we must consider that was how the tune was played by the at that specific moment in time. Thede mentions in her text that each fiddler had their own way of playing tunes. Though she is not explicit about any differences regarding tempo, it is reasonable to think that not every single fiddler played the same tunes at the same pace. Fiddlers today do not play tunes at the same tempo, and even one fiddler might play a tune at a different pace on any given day. I'm sure things were no different in times before our own. There are many things that could influence tempo; too many, in fact, to go into.

The One Step is a dance that was simplified from the Turkey Trot. The latter dance is said to have debuted in 1914 and had African American roots and influence. Music for the One Step is brisk at approximately 120bmp. See Wikipedia article for more information as well as descriptions of many of the figures: en.wikipedia.org/wiki/One-Step

"A man in charge of a wagon was a very valuable member of the early wagon trains that crawled across the West. A wagoner was usually a man of strong qualities and able to think fast in emergencies...In the wagoner's honor, the fiddle tune Wag'ner was named. This is one of the most popular and best known of the tunes in circulation. I have never met a fiddler who could not play a version of Wag'ner."

The other three versions, each collected by Thede in a different county, have tempo indications that are faster than Wag'ner One Step. "Wag'ner No. 3" is suggested to be played at 120-132bpm.

Next week I will unveil information about ways you can become more involved in Old-Time TOTW through Patreon. 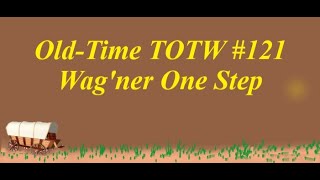 Great tune. Nice fiddling and all you guys sound great together.

Thanks, Peggy! It was great to add Dan to our mix. Looks like you'll be seeing more of him :)

'Fiddle Lesson - How can I avoid shoulder/back pain when practicing?' 1 day

'What do I ask a retaining block wall contractors phoenix?' 2 days