Sarah came from a musical family. Bayard prominently featured her tunes in his book, Hill Country Tunes. He noted:


"In the previous generation of the [Gray] family were five brothers: Charley (Mrs. Armstrong's father), Laney, Dan, Joss (Joshua) and Abe, all skillful on some instrument, and accustomed to playing together for dances...All of these men are now gone, and Mrs. Armstrong, who began playing at the age of five, is the sole legatee of their melodic treasure. As a young girl she used to listen by the hour to her uncle Laney â the most expert fiddler of the group, and the one possessing the largest repertory of tunes â absorbing his music and learning to play it herself. She also use to play cello, on which she would help the group out when they were playing in the pavllion at âKistâs Groveâ (a dancing ground on the outskirts of Derry), and elsewhere in the neighborhood.â

"About thirty-five years ago, [1908/1909 ] her {Sarah's] uncle Laney went to live in the Far West. The âGray Boysâ ensemble broke up, although its remaining members continued to play individually for dances; and Mrs. Armstrong, with the assistance of her daughter at the piano and her son on the guitar or banjo, has likewise continued playing the old music, either for dances or an occasional radio or theater program. The children, however, do not pick up her repertory, and she is left its only preserver."

Sarah played Laney Tunin' His Fiddle for Bayard on 18 November 1943. Regarding the tune, he only notes that "its title and character speak for themselves." Measures 1-2 and 5-6 certainly represent the tuning of a fiddle's open strings (the low A may indicate Sarah was in ADAE "high bass" tuning, though Bayard does not note any cross tunings at all. Between that motif, Sarah inserts a melodic fragment which she then uses as the main melody of the "B" part. This sequence has the same shape as the main theme of the coarse (low) part of the fiddle tune Martha Campbell. (slippery-hill.com/recording/ma...-campbell). Though it shares this fragment, Laney Tunin' His Fiddle doesn't necessarily sound like Martha Campbell and is still a rather unique and interesting tune that has a great drive to it.

I decided to keep my recording of this tune fiddle heavy for obvious reasons, and it really did call out for some harmony in the melody line. I hope Ms. Armstrong would be pleased with my interpretation of her tune. 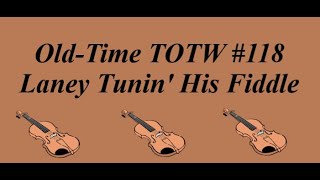 that is cool, Paul. what a neat way to tune a fiddle. i loved what you did with it.

that is cool, Paul. what a neat way to tune a fiddle. i loved what you did with it.

Thanks so much, Peggy!