Stamper is acknowledged to be the last known living representative of the Eastern Kentucky style of fiddling. His style was influenced by 19th century fiddlers, including Daniel Triplett, Shade Sloan, and Si Terry.

The style is characterized, in part, by melodic and rhythinc freedom and self expression through the variation of structure and melody within a tune. The style developed as it did due to the fact that the fiddle was mainly played without accompaniment. People today often describe Hiram Stamper's tunes as being "squirrley," and this is an important factor to explain the crookeness and fact that he rarely played a section the same way twice. Stamper's repertoire focused on tunes from the region rather than radio or recordings.

Like many of the earlier fiddlers, Stamper tuned his instrument quite low. Whereas today tunes are classified according to key ("D tunes," "A tunes," etc), that notion really didn't exist back then. The tunes that modern fiddlers would generally play in the key of A in AEAE tuning were played by Stamper approximately in the key of E (EBEB tuning), a a perfect 4th below AEAE tuning. This low sonority gives the fiddle a rich, archaic sound.

Gerry Milnes suggests the title may relate to Johnâs Creek in West Virginiaâs Big Sandy Valley, at the mouth of which one branch of the Hammonds family settled in 1791 (members of the family spell their last name differently). John Hartford (Fiddler) says older informants have told him the title commemorates a Civil War battle either on Brushy Fork of Johnâs Creek in Pike County, Kentucky, or near Old Bedstead Mountain in southern Floyd County, Kentucky. The battle was supposedly one of the last of the war, according to the veteran Sloan.

John Salyer (Magoffin County, KY) also played a version of Brushy Fork of John's Creek, but Hiram Stamper's is quite crooked whereas Salyer's is square.

Joining me is friend Stephen Rapp on banjo (Kent, OH). We decided to tune low for this recording. I learned the tune directly from a recording of Hiram Stamper playing it. Since I don't use pitch bending programs to learn tunes from source recordings, I tuned as Stamper tuned, which was close to EBEB. He and Isham Monday tuned quite low and influenced me a lot.

Subscribe to my YouTube channel as well as Stephen Rapp's, and be sure to click the bell icon to receive notifications, and don't forget to join the Old-Time TOTW group on Facebook at: facebook.com/groups/33100...

I give remote workshops on the 2nd and 4th Monday of each month that focus on the Old-Time TOTW series. Contact me at FiddlerPaul71@gmail.com for more information 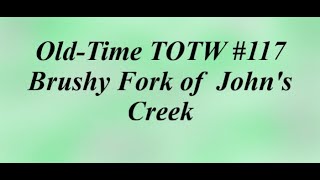 Thanks, Peggy, and thanks for following