Sharp was recorded for the library of Congress in 1939. Abbott Ferriss's field notes about him are quite interesting:

Ferriss went on to say:

"He started fiddling (he says he is no violinist) after watching other fiddlers play, at the age of 15 in Newton County where he was reared. He used his brother's fiddle, which wasn't very good, and I had to steal it whenever I wanted to play.'...

He says he let other people sing, but he never did. In his day they had what they call a 'caller.' When he was 21 he remembers that the guitar was used as 'second' for fiddle, taking the place of the straw. He recalls some fiddlers singing, but he does not sing. 'Have too much respect for neighbors to sing.' [My note: the year Sharp references would have been around 1904. The reference to "straw" refers to "beating the straws" or "playing the straws," a percussive effect of a second person taps on the strings between the fiddler's bow and left hand as the instrument is being played.]

"Since living in Meridian, he has helped organize bands. He does not play a great deal now, but broadcasts from the Meridian station with the band.

'Seconding' Sharp was Douglass Williams, guitar, 1709 11th St., Meridian, a house painter. His father had a band in Clarke County with which he played...

About 18 years ago he [Williams] began playing the guitar. In the old days most pieces were played with in D chord and in A chord..."


The last sentence is interesting and seems to imply that not much fiddling was done outside of the keys of D and A, or that the guitar wasn't used to accompany those tunes.


The Eighth of January is a reference to the Battle of New Orleans, fought and won by American troops on January 8, 1815. Andrew Jackson led a small, poorly equipped army against 8,000 front line British soldiers.

The tune was originally called "Jackson's Victory," but when Andrew Jackson fell from popular favor, it became known as "Eighth of January," thus commemorating the event rather than the man. It is a tune that does not appear to have any direct parallels with tunes from the British Isles, and may be wholly American.

In addition to Sharp, Herbert Halpert collected the tune from other Mississippi fiddlers, including John Hatcher, W.E. Claunch, and Enos Canoy. This was part of a mission to collect tunes for the Library of Congress in 1939. The Eighth of January was also collected from Ozark fiddlers by Vance Randolph in the early 1940s. Thede collected the tune from Jim Settle (Caddo Co., OK), and W. S. Collins (Pottawatomie Co., OK) played a version nearly identical to Settle's. Cuje Bertram recorded the tune on home recordings. These are just some of the many other sources for the tune. (some information from Fiddler's Companion)

In 1936, James Morris ("Jimmy Driftwood") wrote lyrics to The Eighth of January, apparently to make history more interesting to his students. He recorded it as "The Battle of New Orleans" on the Victor label. In 1959, Johnny Horton recorded a version of Driftwood's song. That song was enormously popular, and the event and tune became immortalized due to his recording.

Subscribe to my YouTube channel as well as Steve Blake's, and be sure to click the bell icon to receive notifications, and don't forget to join the Old-Time TOTW group on Facebook at: facebook.com/groups/33100... 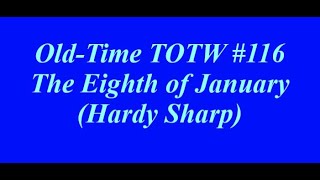 You guys sounded great! That's really different, isn't it? Thanks for all the info and for that version of the tune.

Thanks, Peggy! Yeah, going to that g in the 3rd measure is pretty distinctive. The B part is oddly similar to the B part of Jubal Anderson's Devilish Mary (featured last year for an Old-Time TOTW), which I've always said that whole tune was quite similar to Bob Holt's "The 9th of January." Now, regarding that tune, apparently Bob Holt said it was a version of The Eighth of January, but people didn't believe him, so he said well, then it's the 9th of January!

'Will The Circle Be Unbroken' 17 hrs