Yauger is a fiddler that Samuel Bayard featured in his book Hill Country Tunes published in 1944. Bayard gives some information about Yauger, preceded by some general information in the section "Notes on the Players," about "The Dunbar Tradition":

"In former days this section had more than its share of fiddlers, singers and fifers; and musical families, in which several members played or sang, shared and cultivated the inherited folk art, eagerly picking up songs and instrumental airs from each other, and often getting together for informal concerts and dances."

"'Bub' Yaugher [sic], a man in his sixties, lives on the mountainside above Mount Independence, a short distance south of Dunbar. He was born and brought up in "The Yaugher Holler," a mountain valley near by, in which his family had long been settled. Although he grew up as an "air-player," he learned something later in life about reading music, and is acquainted with some of the commercial publications of dance tunes; but for the collector he was careful to play only those he had picked up locally by ear. The bulk of his repertory came from a great-uncle of Irish extraction, whose playing was noted throughout the community. Apparently Mr. Yaugher spent much time with him, committing to memory as many of his airs as possible. Other tunes he learned from various local fiddlers, including some of the Lowrys and McClains already mentioned. He has played for dances a good deal, but has given this practice up in recent years. He is a good gunsmith, and --like most of the mountain men--fond of hunting. Brought up on a farm, he has worked in mines for many years."

Bayard consistently spells the surname "Yaugher," but all documents pertaining to Irvin and his family, as well as his headstone, spell the name "Yauger."

Bayard includes about a dozen and a half tunes from Mr. Yauger. About Honeycomb Rock (and a variant called "The McClellandtown Hornpipe," Bayard notes the tune in what he refers to as "One Thousand," which is M.M. Cole's One Thousand Fiddle Tunes (these are Irish tunes). He notes versions of the tune called "Push About the Jorum," "The Rowan Tree," and "Rattle the Bottles." Push About the Jorum was also notated as a strathspey by Cole. Bayard also notes that the tune takes its name from this verse:

Those words can be sung to the A part.

McClelland Town Hornpipe is named after a town in Fayette County, PA.

A jorum is a large bowl or jug used to serve drinks, such as punch (spiked, I think). 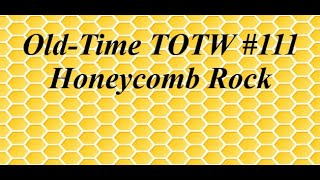 That's a cool tune, Paul. Nice fiddling and everybody sounds good together.

I always liked the look of this one in Hill Country Tunes. Sounds great and I plan to commit it to memory.

That guitar sounds great, well it all sounds good but that guitar has a great tone.

RobBob: I will pass your comment on to Sean, he will like hearing it. His friend custom made that guitar for him, and it really is very sweet!

'starting to think harmonica is' 2 hrs

'Try to mimic the bow use of others' 1 day