The Hammons family is well known for traditional music in West Virginia. Burl and his brother Sherman both learned to play fiddle by sneaking their father's fiddle when he was not around. This seems to be a common theme among the older folk musicians, and it makes me wonder why the fiddle was not openly shown and taught to the children. Perhaps that was due to the negative association with the fiddle and the devil, especially among more religious people. But, Paris' brother Edden (1875-1955) and Uncle Peter (1841-1943) both played the fiddle as well.

Burl traveled quite a bit to enter fiddle contests. He was recorded in the 1940âs by West Virginia University professor Louis Chappell. The recordings remained unpublished until West Virginia University Press released them on LPs in 1984 and on two CDs in 1999 and 2000. Hammons was recorded by the Library of Congress playing and singing with his sister Maggie and brother Sherman. (source: obituary)

The Hammons family became well known to folk musicians through Dwight Diller, a native of Pocahontas County. In 1969, he returned from West Virginia University and located several outstanding musicians, including the Hammons family. Dwight recorded their music, singing, and stories, which portrayed a world that was different from what most people knew. This was at a time that the "folk revival" was quite popular. Beginning about three decades earlier, tune collectors traveled about the United States, often in remote areas, to document folk music and arts for the Library of Congress. And about a decade before that, scouts for record companies went about to find musicians to bring into their studios to record what was then called "Hillbilly music." The reasons for seeking out folk musicians in the 1920s and late 1930s and onward were quite different, but the result was much the same: it caused a greater awareness and interest in mountain music, or old-time music (as it would yet, even later, be commonly known). It would not be until many decades later that proper credit--or any credit whatsoever--was rightfully given to Black and indigenous persons for their contributions to the art; in fact, we are still discussing and discovering these things now.

Burl Hammons played Singing Birds on banjo in a 1970 recording found on the Rounder CD "The Hammons Family" (1998). Larry Warren includes it on his monumental Slippery Hill site: slippery-hill.com/recording/singing-birds

"Burl learned 'Singing Birds' from Early Cogar. It has a slight, but probably coincidental resemblance to the well-known bluegrass tune 'Little Birdie', but Burl knows no words to it. He plays it with his banjo tuned f-sharp-D-A-B-E." (from Rounder recording booklet notes by Alan Jabbour.)

Burl is tuned rather high in the recording I used to play along with. It translates to approximately A=463 (rather than the "usual" A=440). This again emphasizes the fact that Old-Time musicians didn't always tune to a 440 A.

In this recording, I tuned my viola an octave below fiddle, in high bass tuning (ADAE), using approximately a 463A. 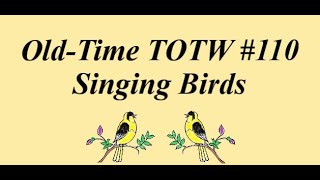 Very nice. Here's a couple of versions that I recorded many years ago. Hope you enjoy them.

Would love to fiddle this with you :)

Thanks, Peggy! I recently got new strings for that monster. Took a bit to figure out what they were. I posted photos on a few forums, and many thought they were octave violin strings since I have it tuned so low and it sounds good and isn't "floppy." Tension certainly isn't tight, but not floppy, either. I looked at YouTube videos of people showing their violas set up with octave strings (what would we do without YT??), and just by that, I could see those were clearly not the strings on this viola when I acquired it. The octave strings are so thick that you need to widen the grooves on your nut and bridge. Saved me money on those and the hassle and headache! Turns out they were Obligatos, which are expensive strings (around $130 for a set). Too rich for my budget, but I really wanted the same strings that were on it because the sound was great and they handled very well. Waited for Shar to have a 25% off sale and treated myself to a set (minus the high "A" string, which is a different string). An old friend who plays viola professionally told me she thinks the A is a D'addario Pro Arte. I hope so, as that's not a very expensive string. So, I'm good to go for a while!

One of these days when we find ourselves with money to spend (LOL...it could happen) I will look into those strings for mine...such a nice sound.

One of these days when we find ourselves with money to spend (LOL...it could happen) I will look into those strings for mine...such a nice sound.

Keep an eye out for those sales from Shar, Johnson Strings, Southwest Strings, etc!

'starting to think harmonica is' 2 hrs

'Try to mimic the bow use of others' 1 day