Price is not a fiddler who is well known today, though he contributed many fine and unusual tunes to Marion Thede's The Fiddle Book, some of which appear to be unique. See past episodes of Old-Time TOTW for other tunes from J.S. Price, such as #36: Tulsey Waltz,#68: Tom and Jerry, #73: Custer's Last Charge, and #103: Bonaparte's Retreat.

Thede noted more details about Price than many of the other fiddlers she featured. Though Thede gave no words for Old Paint, she remarked:

"Old Paint was sung by western Oklahoma and Texas cowboys, and is still a favorite song of people of all ages. This cow-country melody as played by an old cowboy fiddler is presented in his 'cross keying', and is a freakish version of a well-known song."

According to Wikipedia, the song was first collected by songwriter N. Howard "Jack" Thorp in his 1921 book Songs of the Cowboys. Thorp wrote:

"Heard this sung by a puncher who had been on a spree in Pecos City. He had taken a job temporarily as a sheep-rustler for an outfit in Independence Draw, down the river, and was ashamed of the job. I won't mention his name."

Alan Lomax recorded Jess Morris singing and fiddling "Goodbye Old Paint" in May 1942. This appears to be the tune from which Price's version came. In 1928, an Amarillo, TX, newspaper credited Morris with composing the song. Morris never claimed to have written the song. According to BlackPast.org, Morris was quick to clarify that he learned the song in 1885 (when seven years old) from Charley Willis. BlackPast.org gives more detail:

"African American cowboy Charley Willis was recognized as a singing cowboy who authored the popular trail song, 'Goodbye Old Paint.' Willis was a skilled cowhand who not only sang songs from the trail but who contributed to preserving authentic cowboy music from the era."

BlackPast.org mentions that "Good-bye Old Paint" was Willis' favorite song, and family tradition claims that he did have a horse named Old Paint, who was a trusted companion on the trail.


Some note a similarity of Old Paint to "Midnight on the Water" (Thomasson family). Though both are played in DDAD tuning, the latter is much more elaborate with more chord changes.

A paint is a breed of horse that combines both the characteristics of a western stock horse with a pinto spotting pattern of white and dark coat colors. (Wikipedia)

Contact FiddlerPaul71@gmail.com for information about remote private lessons and workshops. 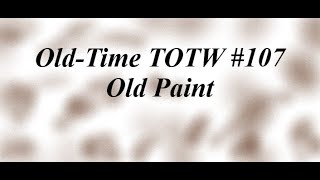 Wow, that one is really beautiful and sounds like it was made for viola. How are you tuned? If I play my viola, if I play something in D sometimes I tune to DADA, I think so at least but not sure...because I rarely have ever played anything in D on my viola as of yet. How are you tuned?

Oops...I just noticed the second time through on the video you had DDAD written on there...I think it flew by me, thinking it meant the fiddle tune was done in DDAD tuning...was your viola tuned DDAD?

Hi Peggy, yep, I'm tuned DDAD here, an octave below fiddle. Not many violas can handle such low tuning. I think it's a combination between its large size (nearly 16 3/4) and high quality strings (Obligatos). This is how it came to me, but I tuned it down, of course

Thanks, Peggy...and no worries! Glad you liked it :)

'Tim the Turncoat take one' 14 hrs