Mr. Robertson recorded many tunes which appeared on several albums from the 1960s until his death. He played guitar, mandolin, fiddle, sang, and wrote tunes as well.

I probably cannot do justice to relating the high points of Mr. Robertson's life, so I will quote his obituary, transcribed from the Ozark County Times, published on 26 February 1981:


Funeral services for Lonnie E. Robertson, 73, Springfield, formerly of Theodosia, were held Monday at the True Hope General Baptist Church with the Revs. Byron Yount and Allen Ledbetter officiating.
Mr. Robertson died last Thursday in the Springfield MediCenter after a four month illness.
Mr. Robertson will be remembered for his radio program, Lonnie and Roy, broadcast from Pittsburg, Kans., in the days of the crystal set and later for his program, Down Home Folks, with his wife Thelma. He had made a number of records of fiddle tunes, the latest being, Fiddle Tunes-Ozark Style. He and his wife built Thelma and Lonnie's Court at Theodosia in the early 1950's and operated it for a time before selling and moving to Springfield. The court was sold a number of times and in the 1960's the business was closed out and the cabins were sold and moved from the property.


Regarding the tune itself, this description comes from the Traditional Tune Archive site:
The title appears in a list of traditional Ozarks Mountains fiddle tunes compiled by musicologist/folklorist Vance Randolph, published in 1954, and, indeed, the melody seems to have had wide currency in the region. Arkansas fiddler Jesse Wallace learned the version he plays from a fiddler named Frank Watkins in the mid-1930âs. Ozarks fiddler Fred Stoneking told the story (heard from Bill Mustain) of two brothers who resolved their c. 1920âs dispute about how the tune should be played by calling one version âSaddle Old Kate,â and the other âSaddle Old Spike." Drew Beisswenger (2008) sees similarities to some versions of âGot a Little Home to Go to," while Mark Wilson sees resemblances in the Skillet Lickersâ 1930's tune âDonât You Cry My Honey.â

Joining me is Stephen Rapp on banjo (Kent, OH). 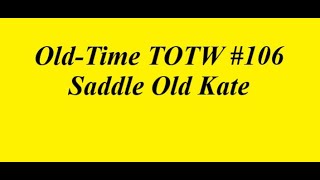 'Tim the Turncoat take one' 15 hrs