That "darned" F chord on the guitar

I'm not a guitar player..at all.. Finally, I thought I'd found a good guitar player who could accompany me on C tunes.. after about 4 tunes the guitar player said that there was thumb pain in the left hand.....bummer.........Once again..foiled!!!! The comment was also made that basically, playing in C required pretty much all of the fingers most of the time.. Again, I'm not a guitar player so I really can't relate..However, I DO know that many of the Hangout fiddlers also play guitars. What do THEY say about this? 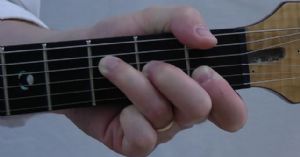 Arthritis may have been a contributing factor.

With all the runs in backup, I love playing guitar in C, or any other key. Try to keep the runs complimentary to the melody and the rhythm of the tune. Of course, I would rather play fiddle or banjo.

I've never used the thumb (chording hand) for guitar, but that's probably because I have short fingers and play a classical guitar.

But, I have seen the thumb used in a G chord before. I've always preferred to use a barre for a full 6-note F chord, myself, because - see above.

I've always preferred to use a barre for a full 6-note F chord, myself, because - see above.

Rock guitar players habitually use the thumbed F chord mmussiiccaallii shows in his post. Who knows who first did it that way or why, but it is totally easy to do on a solid body electric because the neck is so skinny and the strings are so thin. It doesn't hurt that the thumbed F chord is one more opportunity for an electric player to show how rebellious he/she is.

I thought it was the barre chord also, because if played by thumbing the low F, that note doesn't even need to be strummed, so the thumb could relax the pressure.

Anyway, all fiddlers should carry a capo for their forgetful accompanist.

Key of C is the best key for picking the melody out of just the cowboy chord shapes. C to F shape is just a matter of moving a string down. Look at the guitars when you call key of D--they are all capo-ing up 2 frets to play in C shapes. Hardly anybody stays 'nekkid' and plays D shapes in that case.

Actual most chords use the thumb - on thy back of the guitar neck.

Well I've heard a lot of guitar players who can't play much because of arthritis, and apparently it affects guitar players moreso than other instrumental players. Fortunately, I don't know this personally because I haven't been visited by "Arthur," myself, and feel for anyone who plays who deals with that critter.

But for me, a lifetime amateur on guitar, C is really the easiest key to manage. As some have said above, you don't really need the top strings on F if you can't get to them that good...just the bottom four will do. Although F in played in any way might be a little awkward for beginners or for anyone with hand problems, still...C is just easy overall, and especially for fingerpicking...it's all just laying right there inside the chords to be easily gotten.

But besides capoing up to other keys, which sometimes has other issues to deal with, anybody who had difficulty playing guitar at all might benefit from finding open tunings for the keys they like to play in. Sorta like how they do on slide guitars ... your tuned to the chord of the key you want, and then you just pick out the notes and chord changes are pretty easy too...I speak from zero experience with open tunings. Well not zero...once I fumbled around and found a tuning I needed for playing background music for an oral history project in the ky mountains I got a chance to do...all I had was my one guitar, and usually I could borrow instruments, but the people decided at the last minute they needed background music for the filmstrip to make it more interesting...so...I had a job, a child, dirty dishes as always has followed me around...lol...stayed up all night reading the script and then listening to the tape and comin' up with something, anyuthing...had trouble knowing what was legal (was a big fear to me back then...lol...now I don't care) and finally just fumbled around and tuned my guitar to something that would sound more dulcimerish and just made up most of the stuff, went to the recording studio the next night and got it on there. 50 bucks for goin 48 hours with no sleep...that was good money when minimum wage was 3.35...lol...plus so much more fun for me than my job could ever had been.

Ok, so well, with almost zero experience in open tunings, outside of the one time I did it and had no idea where I was tuned to at the time I was using it...I've heard a lot of Hawaiian Slack Key guitar, from knowing a small handful of folks who migrated to Hawaii...if you have hand problems and like to play guitar, this would be a great resource...some of the slack tunings are "secret," but there's a lot of shared info on how the tunings work online now.

Chords , capos, cumulative stress injuries .... yeah ... full six tone barre chords can get old playing a dreadnought with a medium action. Alternating chord shapes can help a bit, playing in "C" with either the capo in the first or third fret works well enough to smack out some rhythm. If you want to get some tired fingers bang out some four tone chords for a coulpe of hours on a mandolin. R/

Richard, how do you play guitar in C with a capo at the first fret? I don't see how that could help much.

I usually don't play the low F (first fret on the 6th string). I alternate between the higher F (3rd fret 4th string) and C (3rd fret 5th string) with my ring finger.

I'm a big proponent of playing in D open (and E and F with a capo). Fuller sounding chords, and access to a great phrase-ending ending "D run" in the lower octave.

Here you go - it's just an E shape moved up one fret, which is barred at the first fret with the index finger (all six strings covered by the finger - essentially a capo).

I often use the index finger to cover just the first 2 strings, which is the, I guess, popular way to play an F chord.  In classical guitar, barre is used quite often to move positions up the neck. 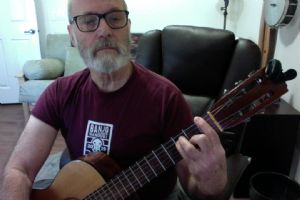 Rock & Rollers habitually play in A because it's easy to lay a semi-barre across the second fret with your index finger and use your ring finger to do that all-too-familiar runta-tunta blues-rock rhythm. For me, though, G and D are the chords my fingers naturally gravitate toward. D is particularly wonderful for finger-picking as the hammer-ons and hammer-offs are both easily accessed and oh-so-mellifluous.

D is particularly wonderful for finger-picking as the hammer-ons and hammer-offs are both easily accessed and oh-so-mellifluous.

Those same giggles can be found on the second string while playing A.

D is particularly wonderful for finger-picking as the hammer-ons and hammer-offs are both easily accessed and oh-so-mellifluous.

Those same giggles can be found on the second string while playing A.

I wish!  My fingers are just too fat to perform the same gymnastics on the A string that they can do on the E string.  The guitar also just doesn't ring out as much.  Also, for me, it takes more finger moxie to properly do an A chord than it does to do a D chord.

As for the key of G, it falls under the fingers even more naturally than D if you do it as I do, fingering the chord with the pinky on the high G, the ring finger on the low G, and the middle finger on the fifth string at the B.  It allows a double hammer-on with the index and middle fingers to sound a C chord.  Think of Jorma Kaukonen's Embryonic Journey -- though on the Jefferson Airplane's Surrealistic Pillow album he has the guitar capoed up so that the tune happens in A.  This isn't to say, though, that I avoid the A.  My rock friends can't play in anything else...

Well so much for my ageing gray matter .. apparently my brain kicked from the key of C to the Key of F . Hence my capo comment. I do play often in the key of C without difficulty. F and Bd over and over again do wear me out. R/

I use a lot of barre chords for some tunes; "Puff, The Magic Dragon" and "Westphalia Waltz" come to mind, they start on the 5th fret and work their way down to the open fret.

I've been playing guitar for 50 years, well almost...3 more years will make 50, and when I go after a barre chord, I'm still not sure what's gonna happen...lol.  I'm talking about a real barre chord, as opposed to wrapping your thumb around the neck.  I normally go for the thumb, but sometimes it's impossible to avoid a barre chord, and then I get the heebie jeebies.