I was going initially going to wait to post this until I was finished, but a small delay in my project has caused me to decide to go ahead and post what I've completed so far.

I've built a fair number of instruments before, as well as rebuilding and restoring a number of instruments. These have ranged from resonator guitars to archtop mandolins. I really enjoy building, and making the tools and jigs to build what I'm building. Several of the instruments I've built have been 'box' style instruments. Designed after and some using parts of cigar boxes. However, I'm not a huge fan of the tone a pure cigarbox instrument, so I've typically built them with proper tonewoods and construction, and as a result, the sound is typically as good or nearly as good as a standard instrument.

After coming back to playing fiddle last fall, I naturally started thinking of building a box fiddle. Despite not partaking myself, whiskey box fiddles were particularly interesting! Lotsa research and design effort went into this before I started.

For this one, I elected to build it with a cross between box construction and traditional violin construction. I used some very nice tight grain spruce for the top (a jumbo ukulele top) and then some really beautiful maple for the back and ribs. For the neck, I chickened out and used a pre-carved neck. It took some re-work to fit into the project, but that was no issue.

When I started the project, I was going to use an actual whiskey box, and being from TN, I was able to source a JD Barrel House 1 box to use from a friend with close ties to JD. Unfortunately, the wood was pretty badly warped, the logo was not very good, and it was actually not long enough for the fiddle. Thankfully, my buddy with the laser engraver came to the rescue. We found some logos in photos and were able to re-work them to use for engraving on the top. Very lightly engraved to ensure there was no significant sound change.

I also carved the top on the inside somewhat to give some contour to the otherwise flat soundboard.

So far, the box is built, the neck is attached and the fingerboard is shaped and basically ready to glue on. 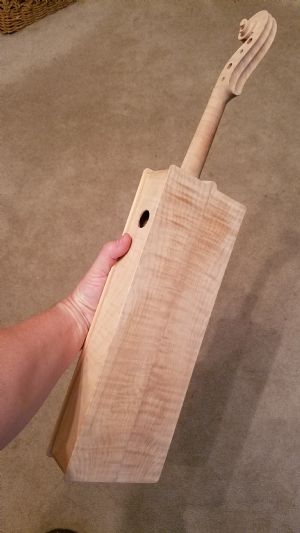 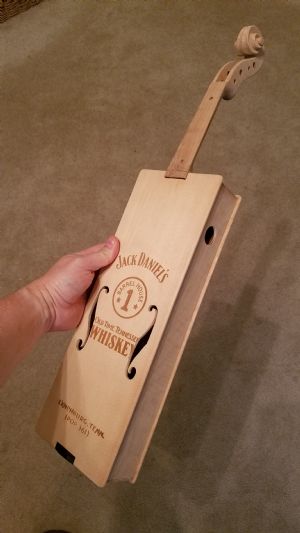 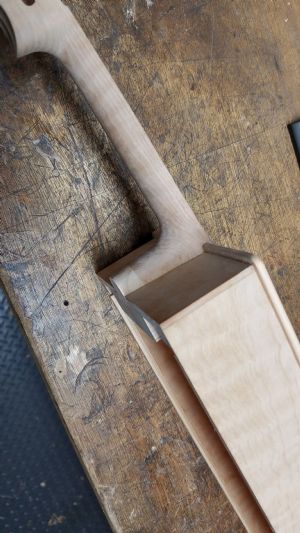 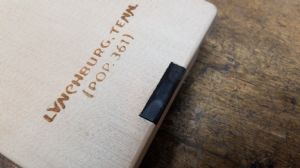 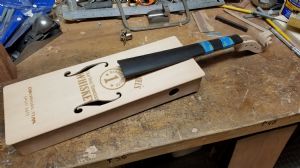 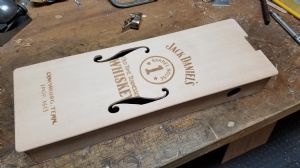 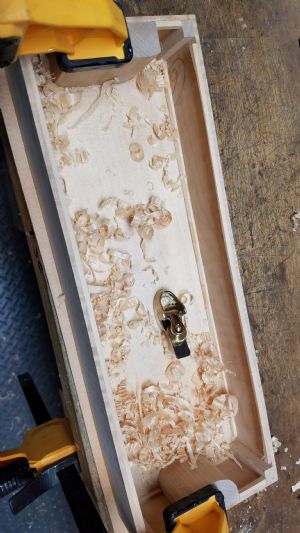 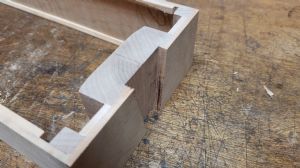 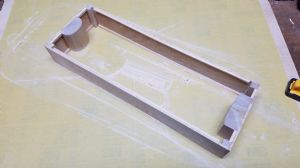 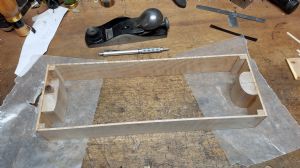 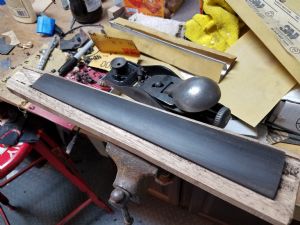 Inspiring - on several different levels. Nice work. Thanks for sharing.

I really like your work. Please post picture when you get it strung up.
Thank you
God Bless
Bobby

Some more progress. I aged it several days in the sun with a coating of sodium nitrite on it. One pic shows a pic of untreated wood with the fiddle.

Today, I was able to fit the pegs, bridge and endpin and the string it up.

How does it sound? Of course it does not sound like my regular fiddles, but it does IMO sound quite good. I think after I finish varnishing it and spend more time working on soundpost location I can improve it even more. Currently I have it strung with Helicores.

Two details to work on -

Simple issue - the chinrest I bought does not have deep enough brackets to fit the instrument. I found a set of extra deep barrels on eBay that should resolve that quickly when they arrive.

More complex issue - I put an extra sound hole on the treble side of the ribs during the build. I spent time playing it with the hole open and taped over at various amounts to gauge the tone. Both my wife and I agreed that it sounded better more closed or completely closed. I may have something creative to close it after I finish it completely. 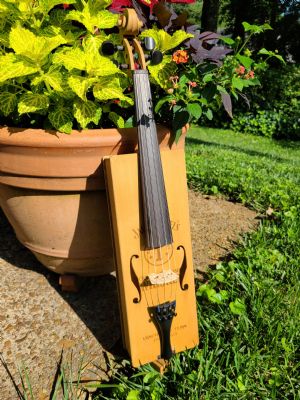 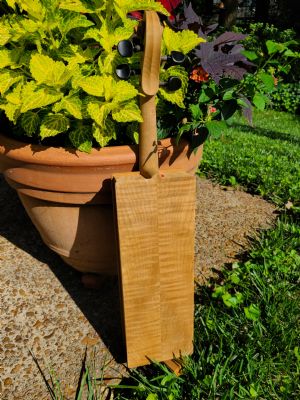 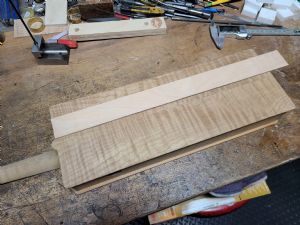 I like it. Good job. Very pretty.
God Bless
Bobby

Finished up to color varnish which has now cured for several days.

Moving to clear now and then cure for a while. 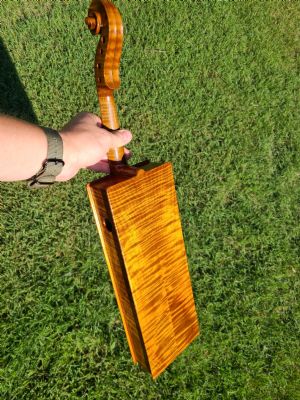 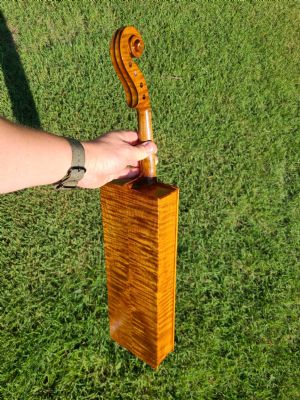 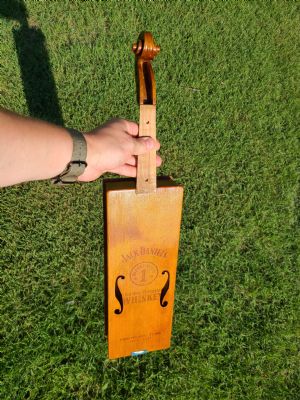 Fiddle is finished - sort of!

I decided I needed to understand if the design really was going to work in its current form, or if I was going to need to cut C-bouts into it. So I did a full assembly on it, while only tack gluing on the fingerboard.

Good news is after working with the bridge and soundpost some as well as changing to some Dominants - it really sounds quite good.

I'm going to allow the varnish to cure a couple weeks, then polish it and reassemble.

For a chinrest, I used a center mount, which I prefer anyway. I used extended viola barrels to make it fit the deep body.

For the shoulder rest, I used a Kun micro which is for 1/8 size violins. I then set it for its smallest width and it fits perfectly.

Some things I'd change -

- I made the ribs too thick. Probably twice as thick as needed.
- The neck and tail blocks are too big as well. I was worried needlessly about levering action on the ends. Its overbuilt.
- The two changes above would cut the weight down significantly. As it sits, it is about 100 grams heavier than any of my other old or new fiddles. 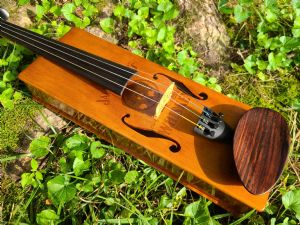 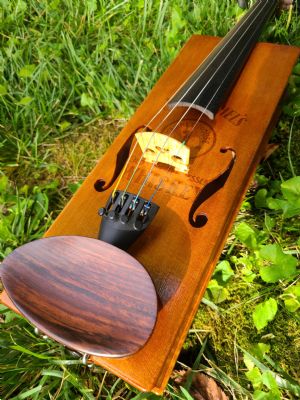 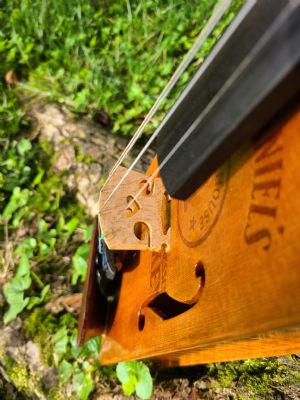 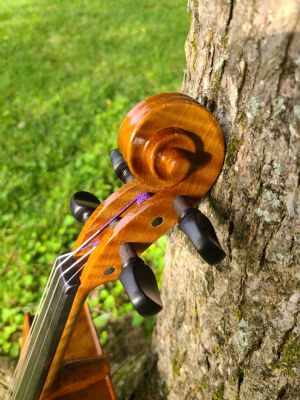 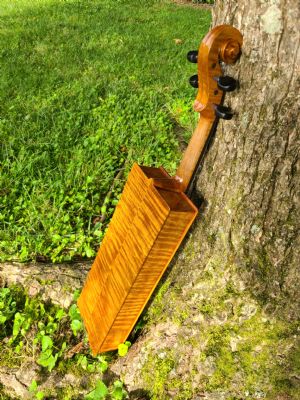 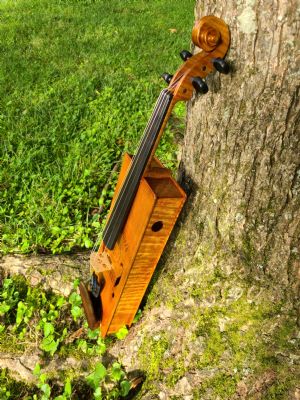 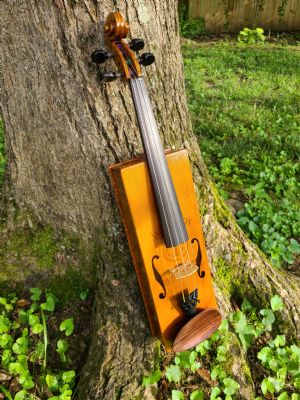 'Fiddle Lesson - How can I avoid shoulder/back pain when practicing?' 1 day

'What do I ask a retaining block wall contractors phoenix?' 1 day